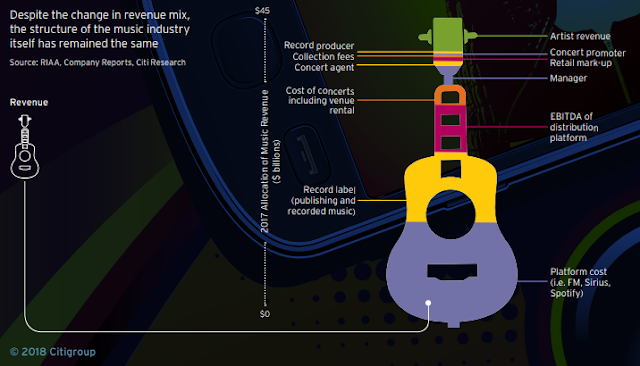 Finance institution Citi has released a research report on the global music industry that is garnering headlines in the music press and sparking social media conversation among musicians.

According to the report, the music industry is in the midst of two profound changes. First, consumers are increasingly opting to rent — rather than buy — music. Second, the demise of physical music has prompted artists to tour more often, driving significant growth in concerts and festivals.

In the U.S., the music industry generated $43 billion in revenue, matching the prior peak in 2006. While business-to-business (B2B) revenues (Music Publishing and Licensing) and music ads (AM/FM, YouTube) are flattish, consumer outlays (Concerts, Subscriptions) are at all-time highs.

Artists’ share of music revenues is small. In 2017, artists captured just 12% of music revenue with most of the value leakage driven by the costs of running a myriad of distribution platforms — AM/FM radio, satellite radio, Internet distributors — augmented by the costs (and profits) of the record labels.

The proportion captured by artists is, however, on the rise (it was just 7% of industry revenues in 2000). The bulk of the improvement is not driven by the growth in music subscription services. Rather, it’s driven by the strength in the concert business. Music labels act as intermediaries for subscription services (Apple, Spotify) but are largely excluded from the economics of the concert business. As such, growth in concert revenue is particularly helpful to artists.