No longer having any fun, longtime Cleveland radio peronsality John Lanigan quit right in the middle of his WTAM 1100 AM show on Wednesday.

According to News5, if there was a Mt. Rushmore of Cleveland radio hosts, Lanigan would be on it.

The outspoken radio personality rose to local fame in the 1970s and 1980s and was the host of the "Prize Movie" on WUAB. He is best known for his long stint on WMJI, where he was teamed up with John Webster and Jimmy Malone.

Lanigan unexpectedly announced his retirement in the middle of "The Spew" Wednesday on air, and iHeartMedia WTAM program director Ray Davis had to come in and finish the show.

About 18 minutes into Wednesday’s episode of “The Spew,” after a segment on the worst presidents in history, Lanigan diverted significantly from the show’s scheduled topics.

“I met a lot of people, and I really enjoyed doing that kind of radio – doing comedy, doing interviews, and having book authors on and all those kinds of people. This hasn’t been what I’ve found to be fun and I don’t think I’m smart enough to do it. I don’t – for the people who are listening out there, I want you to understand something. I’m here to decide – I don’t think about what’s going to come up, because I don’t know. Ray Davis, our program director, is the one who writes the questions. He does a great job. And then we’ve got to come up with our ideas. I don’t have ideas. I don’t really care what happens with the Browns. Politics doesn’t interest me that much anymore. There’s too divisive of an attitude in the country. So, I just don’t think I’m qualified to sit here and tell you that are listening what you should be thinking and what I believe is the way it should be. And I really found that to be a problem for me lately. I have to sit here and explain to other people what I think is right, and that’s why I never read any of the texts. They can say, ‘You’re a dirtbag, get the hell out, you’re a loser, we don’t like you,’ or ‘That’s a great idea,’ whatever. It doesn’t matter to me anymore. I’m done. I’m retired. I haven’t been in Cleveland in quite a while, and I don’t plan to go back. I’m in Colorado in the mountains and having a nice time. It’s a beautiful morning up here. So I don’t have to fight about anything at all. I guess it came down to the fact that – with the elections and everything else that’s going on, I have to come up with something and sound halfway intelligent, and I don’t think I’m doing that. So I don’t care what happens in politics anymore that much. I don’t care about the tariffs. I don’t care about Trump. I don’t care about the rest of the stuff and I think a lot of people are like that. You want to get on with your life and live it and enjoy it. So with that in mind, that’s it for me. I am done on The Spew. I won’t be back.”

Lanigan closed his monologue by saying he has to clean up his backyard in Colorado after hundreds of elk traveled through his property the previous night. 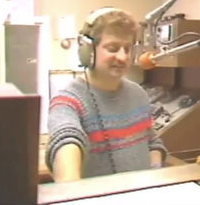 Lanigan arrived in  Cleveland in 1971 to become the morning host at WGAR 1220 AM as a replacement for Don Imus. With his outspoken style, Lanigan would quickly become a popular (and controversial) personality in Cleveland. John did his last show on WGAR February 9, 1984, after which he left Cleveland for a brief stint in Tampa, Florida.

Lanigan would return to Cleveland in 1985, becoming host of The Lanigan and Webster Show on WMJI FM 105.7 with veteran Cleveland radio voice John Webster. Lanigan's popularity in Cleveland helped raise the profile of WMJI, leading to the station winning five National Association of Broadcasters Marconi Awards during his tenure.

In November 2013, Lanigan was inducted into the National Radio Hall of Fame at a ceremony in Chicago.

Lanigan's last show was on March 31, 2014, when he officially retired.[9] In retirement, Lanigan stated that he plans to split his time between his homes in Colorado and Florida.[10]

In late 2014, Lanigan made somewhat of a comeback to Cleveland radio, becoming a co-host alongside Mike Trivisonno on The Spew, a daily hour-long debate program on WMJI sister station WTAM.
Posted 11:11:00 AM