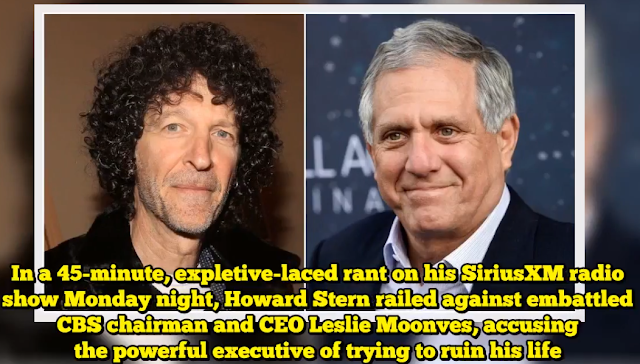 "Les tried to ruin my life," Stern said, according to the Hollywood Reporter.

The veteran radio host referred to a $500 million lawsuit that was filed against him by CBS in 2006. The network claimed that Stern had breached his contract after he allegedly failed to disclose his new deal with Sirius while still employed at CBS Radio. The lawsuit also accused him of promoting his new show while on air at CBS.

"I had done a pretty good job for these guys, kept their stations afloat, quite frankly, and made them a lot of money, and it was a nice way to end," Stern said, adding that he and Moonves had an amicable farewell upon his CBS departure.

When he started his new gig at Sirius, however, Stern said he was “socked” with the lawsuit.

Stern added that he met with Moonves at the time to try to "explain myself to him" and became emotional during the meeting. "When I say emotional, I start crying in front of Les. I've never really admitted that before. I start crying, actual tears," Stern said.

During the meeting, Stern later became enraged, telling Moonves he was going to "unleash hell on earth on you. We're going to war, and I'm going to win."

On Monday, Stern played a clip from his own show in 2001 in which he called Moonves a "snake" repeatedly and said "no one should ever do business with him."

And in March 2006, he appeared on CBS' Late Show With David Letterman wearing a T-shirt featuring a photo of Moonves and wife Julie Chen that read "I Hate Les Moonves."

Speaking to Letterman, Stern said: "I believe you are working for one of the biggest jerks on the planet. You've worked for jerks and bullies who hide behind their press agents. Les Moonves is a bully."

The lawsuit was settled in May 2006, with Sirius ponying up $2 million and Stern getting control of the master tapes from his time at CBS. Other terms were not disclosed.
Posted 5:34:00 AM