iPhone On Track For Biggest Sales Year Ever 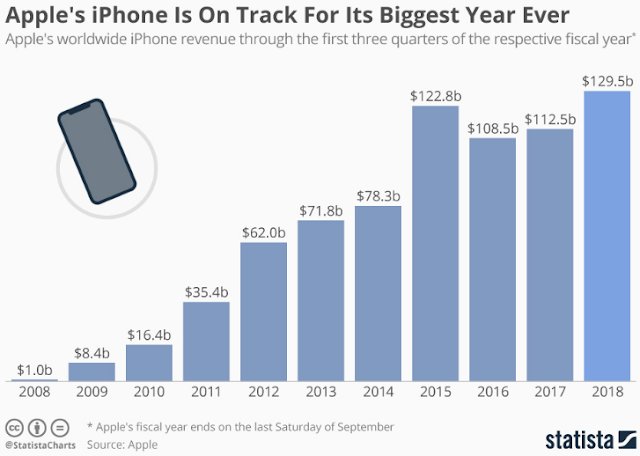 Even though iPhone sales came in just short of analyst expectations in the quarter ending June 30 and Huawei just overtook Apple in the global smartphone market for the first time, Apple’s flagship product is on track to have its biggest year ever, according to Flix Richter at Statista.

Through the first three quarters of Apple’s fiscal 2018 (which ends September 29), the company’s iPhone revenue amounted to a whopping $129.5 billion, beating the previous nine-months record of $122.8 billion dating back to 2015.

Considering that the smartphone market as a whole is no longer growing and iPhone unit sales are also more or less flat, Apple’s decision to release the $1,000+ iPhone X last year can be considered key to the iPhone segment’s latest success. Taking its average selling price to $724 in the most recent quarter, Apple is not even close to its competitors in the smartphone market in that respect.
Posted 3:14:00 AM