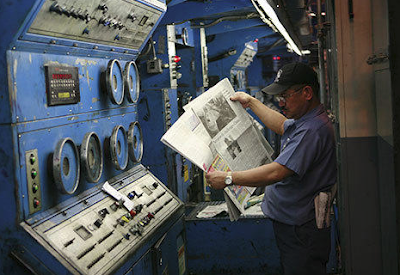 Less than two months after selling the Los Angeles Times, Tronc is weighing an offer to sell the Chicago Tribune and the rest of its newspaper holdings to a private equity firm, sources close to the company said Wednesday.

A bid of between $19 and $20 per share is on the table, according to sources. That represents about a one-third premium to the stock’s $14.77 per share closing price Tuesday, and a total offer that could be upward of $700 million for the entire company.

Sources said that at least one other private equity bid for Tronc may be in the works as well. Politico reported in July on the possibility of an offer for the company from a private equity firm.

The Chicago-based newspaper chain, formerly known as Tribune Publishing, completed the $500 million sale of the Los Angeles Times and San Diego Union-Tribune to biotech billionaire Patrick Soon-Shiong in June, leaving it a smaller but virtually debt-free company. Tronc reported in June it had about $240 million in cash on hand after receiving the proceeds from the Los Angeles Times sale and paying off debt.

In addition to the Chicago Tribune, Tronc’s other major daily newspapers include the Baltimore Sun, Hartford Courant, Orlando Sentinel, South Florida's Sun Sentinel and the New York Daily News, which it bought last year for $1 and the assumption of operational and pension liabilities.

Last month, Tronc laid off about half of the editorial staff at the Daily News in a cost-cutting move.
Posted 3:30:00 AM