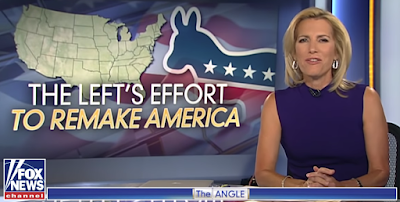 Fox News host Laura Ingraham is once again the target of criticism, this time over comments she made about the country’s changing demographic landscape, which she blamed on illegal — and legal — immigration.

“Massive demographic changes have been foisted upon the American people, and they are changes that none of us ever voted for, and most of us don’t like,” Ingraham said on The Ingraham Angle on Wednesday night, noting that “it does seem like the America that we know and love doesn’t exist anymore.”

“From Virginia to California, we see stark examples of how radically, in some ways, the country has changed,” Ingraham continued. “Now, much of this is related to both illegal, and in some cases legal, immigration that, of course, progressives love.”

According to philly.com, despite studies showing the crime rate among native-born residents is higher than that of immigrants, Ingraham used her monologue to link undocumented immigrants with a series of individuals who committed violent acts.


Ingraham’s comments were widely condemned across the political divide. Rep. Ted Lieu (D., Calif.) called her comments “racist” and said Ingraham is “no more American than I or others are.” Matt Pearce, a national correspondent for the Los Angeles Times, wrote on Twitter that Ingraham’s comments were the “swan song of white nationalism.” CNN senior editor Alex Koppelman wrote: “Fox’s prime time lineup used to put a thin veil over the racism, but they’ve stopped pretending lately.”

“It’s the same level of xenophobia that my immigrant grandparents faced as Italian-Americans 70, 80 short years ago,” Scaramucci said on CNN Thursday afternoon. “I hope she realizes that what she said is just not—it’s against the American values that she’s supposedly touting.”
Posted 3:49:00 AM