As  Madison Police provided an update on Monday that revealed that there is not reason to believe that Sunday morning's shooting at WORT Radio was a random act of violence committed against media.

Police have information to believe the shooting was targeted. The shooting at the radio station on S. Bedford Street left one person with non-life threatening injuries.

According to a Madison Police Department incident report:the investigation continues, detectives are becoming confident that this incident is not a random act of violence committed against media.

WORT Radio Board President David Devereaux-Weber told channel 27 News a masked person entered the station about 3 a.m. Sunday and fired  five shots.  The station is located in a residential/commercial area near downtown.

Devereaux-Weber said the shooter didn't say anything at all, so the people who were working at the station couldn't tell what his or her motive may have been.  The station was transitioning from one show to another when the shooting happened. 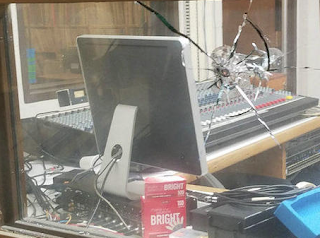 Devereaux-Weber confirmed that the person shot was a 33-year-old man who hosts a show. He's reported to be in stable condition.

Devereaux-Weber says another DJ present at the time of the shooting was Rebecca Barber, whose midnight-to-three shift as "Boss Lady" had just ended when the intruder opened fire. The station is non-profit and relies on hundreds of volunteers to staff on-air, news, and behind-the-scenes tasks.

Both Barber's show and the shooting victim's show that followed feature hip hop tracks.  Devereaux-Weber says the station was off the air for about six hours while police investigated the shooting.

Sources tell 27News a WORT-FM DJ was recently removed from an on-air shift by station leaders over conduct issues, and the host's affiliation with the station was ended.   Police officials decline to comment on whether they have identified a person-of-interest in the shooting.

Devereaux-Weber says among the security upgrades being considered including changing the number punch-pad system to gain entry to the station; and making sure surveillance cameras record, and not just operate to allow staff to observe who is outside the station.  Authorities and top station staff concede the armed intruder may have had knowledge of the station's door access code.
Posted 3:16:00 AM