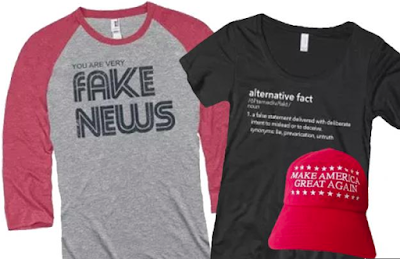 The Newseum in Washington, D.C., came under fire last week for selling T-shirts bearing the slogan "You Are Very Fake News."

Accord To AdAge, a lot of people found it bizarre that the museum was selling merch emblazoned with President Trump's media-bashing catchphrase, since its mission is to boost public understanding of the need for a free press.

Over the weekend, the Newseum apologized for the T-shirts, adding something that should be obvious: "A free press is an essential part of our democracy and journalists are not the enemy of the people."

But it says it will keep on selling "Make America Great Again" merch, which had also raised eyebrows.

"As an organization that celebrates the rights of people from all political spectrums to express themselves freely, we've historically made all types of political merchandise available for our guests to purchase," the statement says. FWIW, there are a few other unexpected items in the Newseum shop, including a sleeveless men's tank top with the slogan, "Just exercisin' my right to bare arms."
Posted 3:05:00 AM