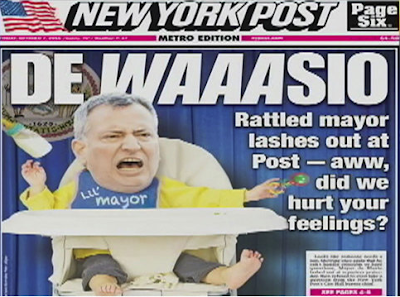 “If you could remove News Corp from the last 25 years of American history, we would be in an entirely different place," de Blasio told The Guardian last week before he spoke at an event in New Orleans, adding that he believes Murdoch is responsible for President Trump's election in 2016.

De Blasio said if it weren't for Murdoch and Fox News, "we would not be suffering a lot of the negativity and divisiveness we’re going through right now."

He also voiced strong disapproval for Trump's rhetoric regarding the media, saying "there is no comparison between a progressive critique of the media — and overwhelmingly corporate media, by the way — and a president who does not believe in free speech and is trying to undermine the norms of democracy."

"If you see a steady decline in democracy, we’re going to have to vividly defend a lot of media we don’t agree with," de Blasio added. "But I don’t want to give them a free pass on what they have done to all of us.”

Fox News isn't the only entity owned by Murdoch that de Blasio has gone after this year. The mayor said in May that The New York Post is "divisive" and that he wouldn't "shed a tear if that newspaper is no longer here.”
Posted 3:39:00 AM