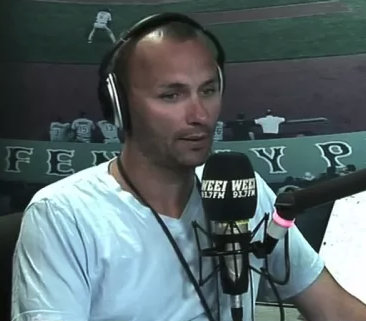 WEEI 93.7 FM's Kirk Minihane returned to "Kirk & Callahan" Friday and opened up about his recent absence from the program.

In a Twitter post Thursday, Minihane said he had checked himself into Winchester Hospital Aug. 2 after experiencing suicidal thoughts. He was then transferred to McLean, where he was released earlier this week.

“For the first time in my life, I had suicidal thoughts," Minihane said. "The way it manifested itself for me was I think I hated the fact I was thinking about doing it, and pretending in a weird way I was almost doing research on it, so if you Gerry or Mut came up to me and said, ‘I’m going to commit suicide on Day X, and I’d like you to put together a plan for me,’ that’s how I started to think about it. I read books, I went online, and if you want to go online for it, like anything else it’s a rabbit hole. It never ends."

According to the station's website. Minihane, who's been open about his bouts with depression before, described the moment he decided to check himself into the emergency room. It came last Thursday, while he was standing in front of his car at a commuter rail station in Winchester.

“I was lying to myself, saying ‘I’m going to look.’ I’m thinking about it, thinking about it, thinking about it," he said. "There I was, at 8:00, wandering around the Wedgemere train station, going around the parking lot, walking around the field around there. A few minutes before, I stood in front of my car and said, ‘I don’t want to do this. I don’t want to die. But I also know this thing in my head that keeps talking about this, saying ‘examine this’ and ‘look at this’ and the word ‘suicide, suicide, suicide,’ and the fact how I felt internally, and I felt over the last couple of weeks, I felt like I was having a heart attack almost all of the time. I was having a hard time breathing. I was also playing this character on the air, who was feeling good; Around my family, who was feeling good; talking to my brothers, who was feeling good. Meanwhile, I was sort of dying on the inside. I said, ‘I cannot live like this anymore. I have to give up whatever power I have.’ I drove the car to Winchester Hospital and walked up to the Emergency Room woman and said, ‘I’m having very dangerous thoughts.’ That was the beginning of five days of hospitalization."