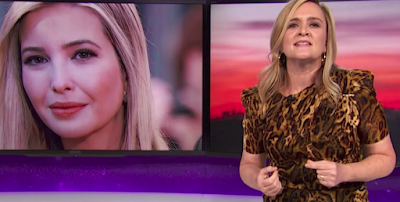 Newly notorious comedian Samantha Bee told a crowd in Los Angeles on Thursday that the media focus should shift from the “one bad word” she uttered to describe Ivanka Trump to the nation's treatment of immigrant children and families, according to Fox News.

Press access was revoked hours before the Television Academy event, which honored Bee’s show, "Full Frontal," and six other programs as platforms for advancing social change, but IndieWire was able to report Bee’s speech.

“We spent the day wrestling with the repercussions of one bad word, when we all should have spent the day incensed that as a nation we are wrenching children from their parents and treating people legally seeking asylum as criminals,” Bee said at NeueHouse Hollywood. “If we are OK with that then really, who are we?”

Bee, 48, a former member of comedian Jon Stewart's "Daily Show" troupe on Comedy Central, was honored on the same day she apologized for calling Ivanka Trump a “feckless c---” during the opening monologue of her Wednesday show, Deadline reported.

Ivanka Trump was criticized for a photo she shared, showing her hugging her son, amid reports that the Office of Refugee Resettlement had lost track of 1,500 immigrant children in the last three months of 2017.

Bee admitted that while her show strives to view the world through an “unfiltered” lens, there are times when she “should probably have a filter.”

Autotrader said in its statement that Bee's comments were "offensive and unacceptable."

"As a result, Autotrader has suspended its sponsorship of Full Frontal with Samantha Bee," the company said.

When asked if Autotrader planned to resume airing ads on "Full Frontal" in the future, a spokesperson said: "We will not run Autotrader advertising on Samantha Bee's show moving forward."

State Farm said in a statement that it has "asked TBS to suspend our advertising in the program and are reviewing any future placements. We constantly review programs to ensure alignment to our programming guidelines and brand values."
Posted 3:22:00 AM