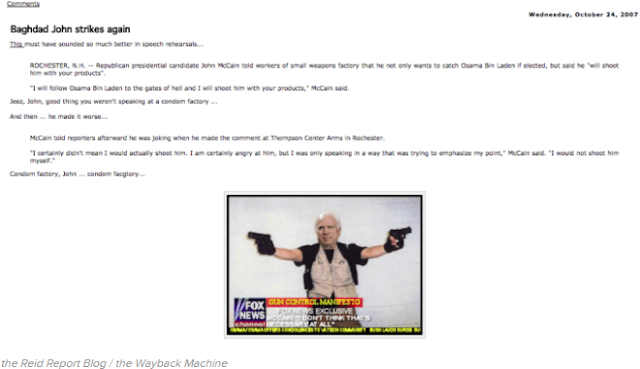 UPDATE 6/1/18 2:30PM:   MSNBC is backing Joy Reid, even as more of her controversial, offensive blog posts have been resurfaced.

The cable network issued a statement of support for Joy Reid on Friday, coupled with a new apology from the host about her past blog posts. However, she did not take ownership of a new set of posts allegedly written by her more than a decade ago.

"Some of the things written by Joy on her old blog are obviously hateful and hurtful," the network said Friday. "They are not reflective of the colleague and friend we have known at MSNBC for the past seven years. Joy has apologized publicly and privately and said she has grown and evolved in the many years since, and we know this to be true."

In her own, lengthy statement, Reid said she's "sincerely apologizing again" for her past writings, which are alleged  to include homophobic blog posts.

The October 2007 post, titled “Baghdad John Strikes Again,” discusses the infamous claim from McCain, then the GOP presidential nominee, that he would “follow Osama bin Laden to the gates of hell.” The image appears at the end of the post, which was apparently penned by Reid.

The McCain post is the latest in a series of archived items from Reid’s blog that have embarrassed the AM Joy host and her network. Though Reid apologized for several anti-gay posts last December, she later attributed others to a hacker. Reid subsequently admitted that she could not substantiate this claim after news reports knocked down the evidence her private cybersecurity expert provided.

Reid and MSNBC have both pointed to an ongoing FBI investigation into the alleged breach.

Friday morning even more controversial posts surfaced, adding to pressure on MSNBC and Reid To offer an explanation.

One post includes sharp criticism of CNN's Wolf Blitzer for being "a former flak for American Israeli Public Affairs Committee" (AIPAC) while accusing the veteran anchor of not hiding "his affinity for his Israeli guests, or his partisanship for their cause."

The Blitzer post, which was discovered by The Federalist on Thursday, a conservative online publication.

"With the Israeli ambassador, Blitzer was solicitous, even posing the incredible question of ‘what can we do’ about the deteriorating situation," reads the Reid blog post from 2005.

The National Review reports the other blog post from 2006 that denounces illegal immigration and insecure borders.
Posted 2:38:00 PM