Product Placement Is Back In Vogue 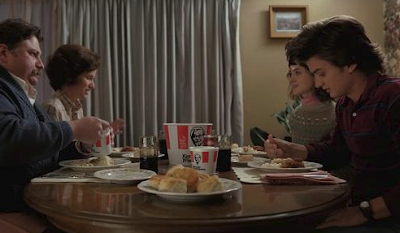 There's a scene in the second season of Netflix's "Stranger Things" where two characters are having an awkward dinner at a friend's parents' home. The teens know something the parents don't: Their missing daughter has killed by a creature from a parallel universe.

To lighten the tension, they stuff their mouths with KFC.

"This is finger-licking good," says Steve Harrington, who is played by actor Joe Keery.

According to CNBC, it's not happenstance there's a red and white bucket of fried chicken featured prominently. It's a paid product integration, brought to you by the "Stranger Things" production team, KFC and Netflix.

"They [Netflix] handle their content in a very respectable way, and we felt it was a property where we have shared values," explained KFC chief marketing officer Andrea Zahumensky, who said Netflix approached them about the opportunity. "You set boundaries, but you have to let them have creative freedom. We didn't know precisely what the script was."

Thanks to Netflix, Amazon, HBO and other "commercial-free" TV experiences, people are gravitating away from shows with traditional ad breaks. So especially in cases where commercial time is scarce to non-existent, some media buyers and companies say they're increasingly looking at product placement opportunities.

Branded Entertainment Network (BEN), an advertising and licensing agency founded by Bill Gates (it was formerly known as Corbis), projects it will place 6,000 product integrations in various types of video content during 2018. The deals will create a total media value of $1.2 billion, about 20 percent more than last year.