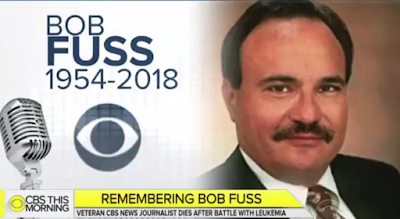 Robert J. "Bob" Fuss, a veteran radio journalist, died Sunday at his Falls Church, Virginia, home. He was 64. The cause was a rare form of leukemia, his close friend Peter Maer said.

Fuss served as a CBS News congressional correspondent from 1998 until his retirement in 2014.  His first major assignment for CBS News was coverage of the impeachment of former President Bill Clinton. Prior to joining CBS News, Fuss covered Congress for Mutual and NBC Radio for seven years.  He previously worked as Los Angeles bureau chief for UPI Radio. He began his professional radio career as a freelance reporter for UPI covering the 1974 Patty Hearst case. He originally aspired to be an attorney but he was attracted to broadcasting at Stanford University's campus radio station KZSU.

When California Governor Ronald Reagan launched his 1980 presidential bid, Fuss covered the campaign and went on to report on every presidential election through 2012.

Following his retirement from CBS News, Fuss wrote a self-published autobiography, "Kidnapped by Nuns and Other Stories of a Life on the Radio." He wrote that he was born "with a whole range of birth defects similar to spina bifida." His parents were told he was unlikely to live past childhood.  Walking with the aid of crutches, Fuss more than defied the dire medical prediction. In his book, he recalled being "a busy and active kid" who "never let anything slow me down."

Robert Fuss was born March 15, 1954, in Bay Shore, New York. His family moved to Woodland Hills, California, when he was a young boy. He graduated with honors from Stanford University in 1974 after completing majors in communication and history.

Former CBS News Vice President Harvey Nagler remembered Fuss for his "rare combination of being an extraordinarily talented journalist and one of the nicest and most positive individuals on earth."  He paid tribute to his ability to "put complicated Washington stories in perspective.
Posted 2:00:00 AM