The Donald-Kim K: 'The Other Big Ass Summit' 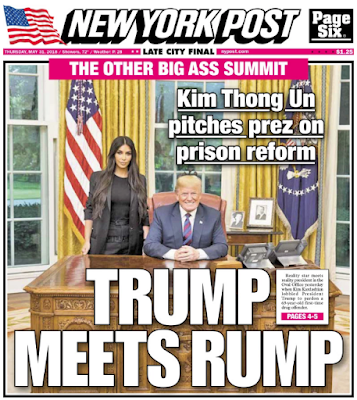 Kim Kardashian met President Trump at the White House Wednesday—and they had more to talk about than their shared past as reality TV stars.

Kardashian spoke to Trump about a possible pardon for Alice Marie Johnson, a 63-year-old great-grandmother from Tennessee serving life in prison without parole for a first-time, non-violent drug offense, according to Newser citing the BBC. Johnson—whose bid for clemency was rejected just days before the end of Barack Obama's presidency—was sentenced to life in 1996 for passing messages between drug dealers. Kardashian contacted Johnson in an Alabama federal prison and paid for a new legal team after hearing about her plight on social media last year, Page Six reports.

Jared Kushner has also taken an interest in the Johnson case.

It's not clear whether Trump will grant her clemency, though both sides hailed Wednesday's meeting as a success. Trump tweeted that he had discussed prison reform and sentencing with Kardashian in a "great meeting," while Kardashian thanked Trump for his time—and wished Johnson a happy birthday.

"We are optimistic about Ms. Johnson’s future and hopeful that she—and so many like her—will get a second chance at life," Kardashian tweeted.
Posted 3:19:00 AM