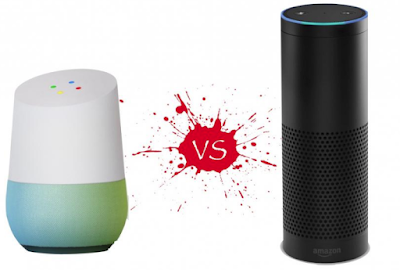 Smart speakers continue to be the world’s fastest-growing consumer technology segment, with year-on-year growth in Q1 2018 of 210% as shipments reached 9 million units.

Google took the top spot, beating Amazon for the first time, shipping 3.2 million of its Google Home and Home Mini devices, against the 2.5 million Echo devices shipped by Amazon.

The US market share fell below 50% for the first time, partly due to Google and Amazon’s focus on expanding beyond their home markets, but also because of the increased traction that the technology is seeing with new vendors in markets such as China and South Korea. Vendors shipped 1.8 million smart speakers into the channel in Q1 2018 in China, while Korea overtook the UK to become the third largest market with 730,000 shipments. 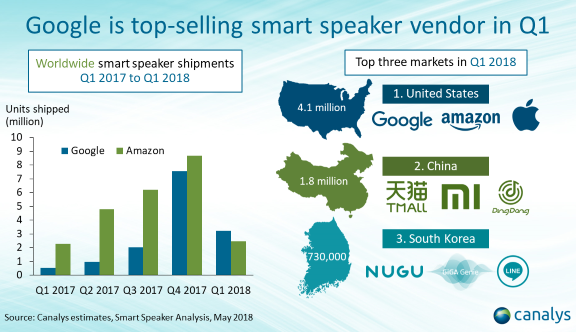 Alibaba finished third overall and retained its number one position in China with 1.1 million Tmall Genie speaker shipments in Q1 2018. “Alibaba has done well to sustain its strong sales momentum since the 11.11 shopping festival in Q4 last year, largely due to Tmall’s superior channel reach and Alibaba’s powerful marketing capabilities,” said Hattie He, Canalys Research Analyst. China’s smart speaker market is growing, with shipments up sequentially by more than 60%. Xiaomi, whose main business is selling smartphones, shipped over 600,000 of its Xiao AI speakers to China in Q1, coming a distant second after Alibaba’s Tmall Genie. “Awareness of smart speakers and their uses is growing steadily among Chinese consumers. But competition is building quickly for Alibaba, as IPO-hopeful Xiaomi takes to the smart speaker segment with much vigor in 2018.” 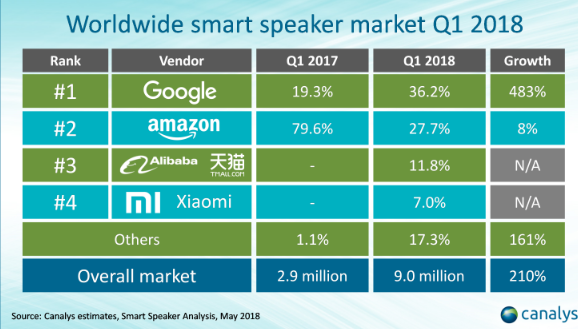 Google’s success comes on the back of shipments into new markets, such as India, where it has explored new go-to-market strategies by partnering with service providers, such as Jio and ACT Fibernet, to reach users. “Google has several advantages over Amazon that have helped it move ahead,” said Canalys Analyst Ben Stanton. “But its biggest advantage is in the channel. Operators and retailers tend to prioritize Google’s speakers over those from Amazon, as Amazon is in the tricky position of being a direct competitor. But Amazon is fighting back hard, and the sheer quantity of Alexa Skills and smart home integrations will be tough for any competitor to match.”