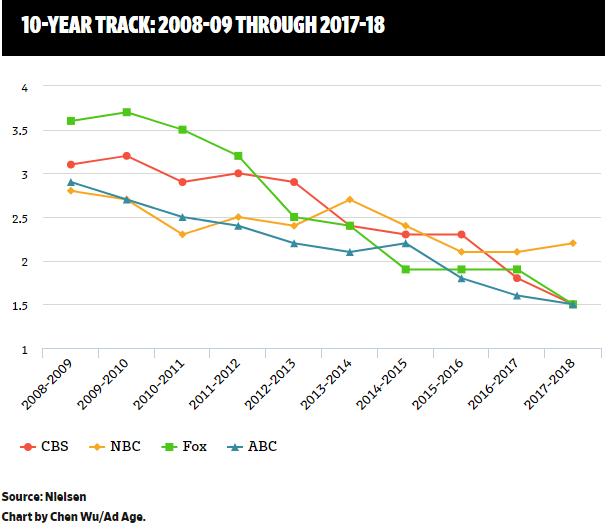 The 2017-18 broadcast season officially came to a close on last Wednesday night, and while each of the Big Four networks issued the usual about how well they had fared over the course of the last 35 weeks, there's little of substance to celebrate in the final ratings numbers, according to Anthony Crupi at AdAge.

According to Nielsen live-plus-same-day data, the average demo delivery for a show that's been re-upped for the coming season is a 1.2, which works out to 1.55 million adults 18 to 49. Three years ago, the average rating for a renewed series was a 1.9.

According to Crupi, that there's almost nothing separating the doomed from the saved speaks volumes about the ongoing ratings erosion. The average draw for the 30 shows that have been terminated is a 0.8. As such, the gap between those that shall live to fight another day and those that have a date with the undertaker can accommodate only around 515,600 demographically desirable viewers. Three years ago, you could fit about twice many adults 18 to 49 (around 1.03 million) on the dividing line between the quick and the dead.

That the division between televised success and failure is more a crack in the sidewalk than a yawning canyon is in many ways a function of necessity—and an acknowledgment that the legacy business model is evolving to emphasize ad revenue less.

On the one hand, if broadcasters canceled every low-rated show, they'd either be forced to dump billions of additional dollars into a development process with an 85 percent failure rate or pare their schedules down to 12 to 14 hours per week. Instead, the Big Four simply renewed more low-rated series than ever before, re-upping 19 shows that failed to deliver so much as a 1.0 in the demo. Three years ago at this time, only four fractional shows were salvaged.

On the other hand, it's fair to say that the push to diversify the business model has begun to lessen the significance of guaranteed commercial impressions. CBS in the first quarter reported that advertising accounted for 44 percent of its revenue, down from 51 percent in the year-ago period. The first to exploit the hitherto untapped riches tucked away in its distribution agreements—CBS is on pace to generate $2.5 billion in retransmission consent and reverse compensation fees by 2020—the network also has aggressively pursued a homegrown content scheme that helps pump out billions more on the back-end (licensing, streaming deals, etc.). When there's that much money to be made outside the ad market, CBS in many respects is no longer at the mercy of the incredible shrinking GRP.
Posted 3:19:00 AM