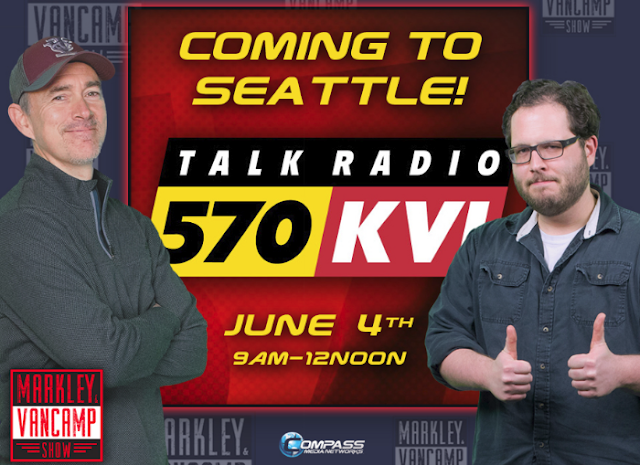 The Markley and van Camp Show, which launched into national syndication two months ago with Compass Media Networks, is thrilled to announce the addition of Seattle on Talk Radio KVI 570 AM owned by Sinclair Broadcast Group.

The show will debut live from 9:00 am to 12:00 noon pacific time starting Monday June 4. The show has been #1 adults 25-54 on KXL-FM in Portland OR for 36 straight books and has been rapidly adding affiliates. Now heard in over 15 markets including Seattle, Portland, Orlando, Peoria, West Palm Beach, Oklahoma City and Baton Rouge.

Rick Van Cise, KVI Program Director, says “The first time I heard Jamie Markley and David van Camp I knew they were the midday answer for KVI.  They tell it like it is with their irreverent take on pop culture and politics.”

Jamie Markley and David van Camp add, “We are pumped to be on KVI, a heritage station that helped put the news-talk format on the map.”
Posted 4:09:00 AM