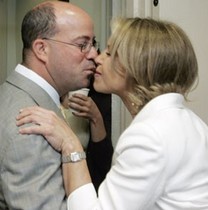 Former NBC Universal CEO Jeff Zucker, expected to set up shop Monday on Park Avenue, is already lining up his next gig -- he's talking about starting a syndicated talk show featuring CBS News anchor Katie Couric, according to a posting at newyorkpost.com.

Word of a possible Zucker-Couric venture comes as the 54-year-old anchor nears the end of her five-year contract that will pay her $15 million this year.

Couric, whose contract expires in May, recently rebuffed approaches from several parties who wanted to work with her, these sources said.

Couric told them she already has Zucker lined up, the sources added.

The two have a long working relationship that began at NBC's "The Today Show."

Zucker, who will turn 46 this spring, is expected to hang out his shingle at 299 Park Ave., home to investment bank UBS.

The two have been putting their heads together to create a new show format that could potentially replace the recently ended program of reigning talk show queen Oprah Winfrey, sources tell The Post.

Zucker closed out his 25-year NBC career this week in Miami at NATPE, a television industry conference where producers shop their syndicated-show concepts to station groups.