Actor Charlie Sheen has left a Los Angeles hospital where he was being treated for severe pain related to a hernia, his representative told CNN Friday.

"Charlie has had a hernia condition for some time," Rosenfield said. "I was told by the person who made the 911 call that it was hernia-related." 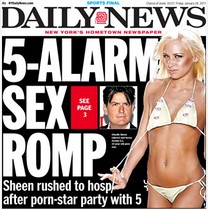 The nydailynews.com reports, in an amped-up replay of his fall meltdown at New York's Plaza hotel, the TV megastar hosted five beauties at his $8 million Beverly Hills pad and wound up in the hospital, entertainment websites said.

A Sheen spokesman said "severe abdominal pains" prompted the 911 call, and a pal told "Extra" he aggravated a hiatal hernia by laughing too hard at the TV.
"I'm not dying," Sheen told the friend, who denied that drugs were involved.

TMZ.com reported that Sheen, on hiatus this week from the CBS sitcom "Two and a Half Men," began partying Tuesday.

At one point, a designer briefcase containing "bricks" of cocaine was delivered to the house, the site said.