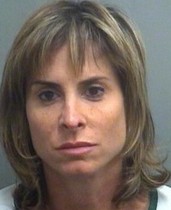 According to page2live.com at the West Palm Beach Post, one of the top managers at WPEC-Channel 12 was arrested Sunday night for allegedly acting like a drunk stripper in a Delray Beach, FL restaurant.

42-year-old Randy Goldklank, who was hired by the CBS affiliaye as an advertising executive two years ago after another booze-fueled scandal in Boston, end up in jail after being charged with disorderly conduct and resisting arrest. She was released on her own recognizance.

According to a police report, Goldklank was 'touching herself, removing her top and dancing on a pole like a stripper." Restaurant staff asked her to leave but call police because she wouldn't.