Glenn Beck calls him world's 'biggest pain in the a--' 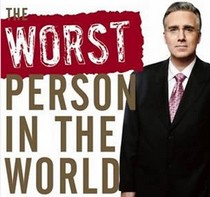 Keith Olbermann broke his silence about his split from MSNBC on Monday night, taking to Twitter to thank his fans for their support, according to the nydailynews.com.

"Citizens Of The Free World: Greetings!" he wrote, three days after announcing he would no longer host "Countdown" for the network. "My humble thanks to all Friends of Keith for the many kind words. The reports of the death of my career are greatly exaggerated."

While fans of Olbermann were shocked on Friday night when he announced his immediate departure from MSNBC, there was at least one person not surprised by the news: Glenn Beck.

"You can handle the mediocre ratings if the guy's not a total pain in the ass," the conservative talk show host said on his show Monday. "But from every indication, Keith Olbermann is the biggest pain in the ass in the world. Nobody liked working with him."

Olbermann, once the highest-rated anchor on the left-leaning network, told viewers during his broadcast on Friday he'd "been told" the show would be his last after a nearly eight-year run.

Many speculated that Olbermann's exist had to do with Comcast's purchase of NBC Universal, MSNBC's parent company, though a network spokesman denied any connection.

Yet Beck maintains he predicted the Comcast sale would lead to a new direction for MSNBC, one that "won't feature Keith Olbermann."

"He was impossible to work with," Beck said.