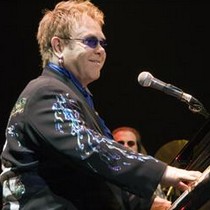 Elton John may have been very close to the late Princess Diana, but the singer says he's not counting on getting an invite to her son William's upcoming wedding.

"I think because of my relationship with Princess Diana, people automatically think I'm going to be invited," John told Reuters in an interview at nydailynews.com.

Prince William is due to marry long-time girlfriend Kate Middleton on April 29 at Westminster Abbey in London.

"I just wish them the happiest of lives together," said John of the couple. "They seem very happy. He's a really terrific man, William, and he's going to be a great king."

John sang a rewritten version of his hit song "Candle in the Wind" at Princess Diana's funeral in 1997 after her death in a Paris car crash.