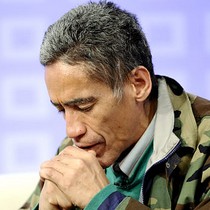 Ted Williams has called it quits on rehab, according to a story at nydailynews.com.

The "Man with the Golden Voice" left the Origins Recovery Center in South Texas against his doctors' advice, TMZ.com reported.

Williams became a YouTube sensation after an Ohio reporter filmed him along a roadside waving a handwritten sign to advertise his vocal gifts in the hopes of scoring a job in radio or TV broadcast.

Within days, Williams had been ferried to New York for the morning talk show circuit, had recorded a commercial for Kraft Foods and appeared as a guest on therapy talk show "Dr. Phil."

Before he won worldwide fame, Williams had long battled alcohol and crack addictions, but claimed he had kicked the habits. Dr. Phil McGraw, as many experts did, cautioned that Williams' journey would be tough even without the drastic life changes he'd experienced in such a short time.

Williams seemed to keep it together for his Kraft gig – but there were signs that he might not be coping with his new fame.

"Ted Williams completed his work for us last week, and we think he did a great job," a Kraft food spokesperson told the Christian Science Monitor an email Jan. 13. "We hope the best for him."

Days earlier on Jan. 10, his daughter accused him of hitting her and said that he had gone on drinking binges.