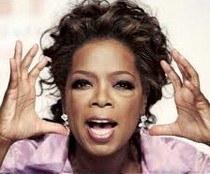 In a revelation worthy of her own show, Oprah Winfrey said on the air Monday that she has a half-sister.

According to a the Speakeasy blog by Joseph Barrett at wsj.com, the woman, identified as Patricia, was born in Milwaukee in 1963 and given up for adoption.

As an adult working two jobs to raise two children on her own, Patricia began looking for her birth mother in 2007.

Using a combination of official records and online sleuthing, Patricia and her children eventually unraveled the truth. “We realized that Oprah could be my sister,” Patricia said. But what to do?

A DNA test confirmed that they were related.

Patricia tried to keep the news quiet, fearing a media frenzy. She said she was worried about hurting Oprah, so she kept the secret.

Eventually, a family member told Winfrey just before she was to go on the air for a show in late October.

She called her mother, who reluctantly confirmed the truth.