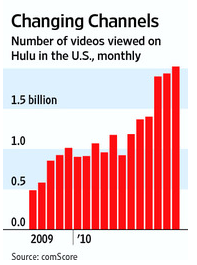 Just as the digital wave transforms the television industry, Hulu, a pioneer of Internet TV, is in internal discussions to dramatically transform itself.

The free online television service has become one of the most-watched online video properties in the U.S. and a top earner of web-video ad dollars since its 2008 launch.

But, report Sam Schechner and Jessica E. Vascellaro at wsj.com,  its owners—industry powerhouses NBC Universal, News Corp. and Walt Disney Co.—are increasingly at odds over Hulu's business model. Worried that free Web versions of their biggest TV shows are eating into their traditional business, the owners disagree among themselves, and with Hulu management, on how much of their content should be free.

Fox Broadcasting owner News Corp. and ABC owner Disney are contemplating pulling some free content from Hulu, say people familiar with the matter. The media companies are also moving to sell more programs to Hulu competitors that deliver television over the Internet, including Netflix Inc., Microsoft Corp. and Apple Inc.

And in what would be a major shift in direction, Hulu management has discussed recasting Hulu as an online cable operator that would use the Web to send live TV channels and video-on-demand content to subscribers, say people familiar with the talks. The new service, which is still under discussion, would mimic the bundles of channels now sold by cable and satellite operators, the people said.

Netflix Beats Expectations With a Rush of Subscribers (nytimes.com)

Netflix Takes Aim at the Cable Guys, With a Promise to Start Firing (Mediamemo-Peter Kafka)
Posted 8:46:00 AM