Christmas Music Is Magical In PPMs 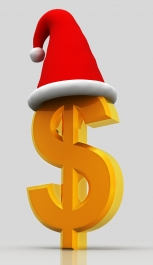 LA:  "I think now KOST is branded as the holiday music station — if you go to KOST, it's Christmas," said Stella Prado, the station's program director. She said she heard the station being played at malls, gas stations and more public places than she was used to. "We were the soundtrack to the season."

KIIS had dominated the local radio ratings throughout 2010, leading the pack from January to November. It had been the only station in Los Angeles and Orange County to top 4 million in average audience — the number of listeners who tuned in for at least five minutes in a given week — peaking at 4.16 million in August. But during the holidays, KOST tallied an astonishing 4.9 million. (LA Times)

Though WLIT pummelled all contenders in the holiday book, the station, as expected, began to fall fast from its top rung as soon as the holiday music ended immediately after Christmas. As recently as the November book, WLIT was in ninth place, while the station tied for 11th place in the rankings in the October book. (Sun-Times)

Tom’s Take:  Competitors will make noise about the special nature of the ratings and surely all holiday stations will settle back to earthly shares.  But smart DOSs will plan ahead to cash-in December 2011.