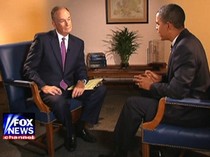 As producer of Fox NFL Sunday, it is Scott Ackerson’s job to keep you riveted to the screen for four-plus hours of pregame folderol leading up to the kickoff of Super Bowl XLV on Feb. 6.

According Dave Barron at chron.com, his list of attractions will include the mundane (the tired “celebrities walk the red carpet and spout inane platitudes”), the whimsical (a TMZ-themed feature on Super Bowl week in the Metroplex) and the imaginative (enlisting Fox News host Bill O’Reilly for the obligatory presidential interview).

Using an opinion show host for the Super Sunday interview is something of a departure from form. Katie Couric of CBS and Matt Lauer of NBC have conducted previous interviews, so protocol would hold that Shepard Smith, anchor of the network’s nightly news show, should be Fox’s man to interview President Barack Obama.

“I remembered that before the (2008) election, Bill O’Reilly had done an interview with Obama, and so I figured they had some type of history,” Ackerson said Thursday. “Secondly, I did want to have it a little different than the news anchor doing it.

“I believe Bill is going to do a different job with the interview and take a different tangent than Matt and Katie took with their interviews. That was my hope going into it, and I’m looking forward to seeing that.”