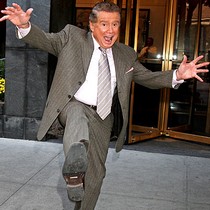 Regis Philbin got so angry over a pay cut that he made the TV announcement to quit during his own show. Executives say the show has not been performing well. Newsoxy.com cites inside sources as saying Regis found out about the pay cut and immediately announced he is leaving the "Live With Regis and Kelly" show.

The talk show host made nearly $20 million a year, but his show has not been performing well and he takes a lot of time off.

Philbin did receive an offer from ABC, but he became angry, and announced on air that he would leave. Co-host Kelly Ripa found out 15 minutes before the two went on the air, and was reportedly "furious" with him because she felt he disrespected her.