Rabbis make use of Murdoch's other media

A coalition of rabbis wants Fox News chief Roger Ailes and conservative host Glenn Beck to cut out all their talk about Nazis and the Holocaust, and it's making its views known in an unusual place.

Paul Farhi at washingtonpost.com reports, the rabbis have called on Fox News's owner, Rupert Murdoch, to sanction his two famous employees via a full-page ad in Thursday's editions of the Wall Street Journal - one of many other media properties controlled by Murdoch's News Corp. 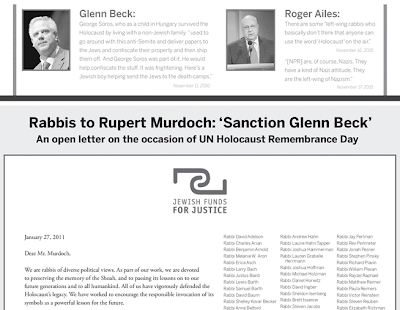 The ad is signed by the heads of the Reform, Conservative and Reconstructionist movements as well as Orthodox rabbis.

The rabbis were prompted by Beck's three-part program in November about liberal billionaire philanthropist George Soros, whom Beck described as a "Jewish boy helping send the Jews to the death camps" during World War II.

Soros was a young teenager in Nazi-occupied Hungary during the war and hid with a Christian family to escape the Holocaust. He once described accompanying his surrogate father while he confiscated property from Jews deported by the Nazis.