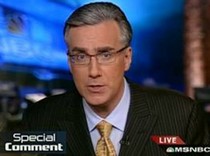 On Thursday, NBC’s news division staged an elaborate presentation for advertisers, seeking to sell commercial time in NBC’s news programs over the next year. All the members of MSNBC’s prime-time lineup spoke at the lunch with one exception: Keith Olbermann, the network’s biggest star, according to Bill Carter in the Media Decoder blog at nytimes.com.

For the last several weeks, Olbermann and the network have been in negotiations to end his successful run on MSNBC, according to executives involved in the talks who requested anonymity because the talks were confidential. The deal was completed on Friday, and Olbermann made the announcement on his final “Countdown” hours later.

Friday’s separation agreement between MSNBC and Olbermann includes restrictions on when he can next lead a television show and when he can give interviews about the decision to end his association with the news channel.

The executives involved in the discussions confirmed that the deal carries limitations for Olbermann in terms of when he can next work on television, though he will be able to take a job in radio or on any forum on the Internet. The deal also prohibits the host from commenting publicly on the deal, the executives confirmed.

The decision was completed one year to the day from the last time NBC decided to end a relationship with an on-air star: Conan O’Brien. O’Brien agreed in the deal not to start up a new television show for nine months, and not to grant interviews for five months. The executives involved in the discussions with Mr. Olbermann said his agreement was not dissimilar to O’Brien’s.