UPDATE: After Falling Off Stage

﻿﻿﻿One minute he was strumming and singing. The next he was unconscious, reports usatoday.com.
Jimmy Buffett, 64, had just finished crooning, "It's been a lovely cruise, I'm sorry it's ended," when he fell off the stage at the Hordern Pavilion in Sydney, Australia, Tuesday night and was rushed to hospital with a head injury.

He is in stable condition at St. Vincent's Hospital, reports TMZ.com. 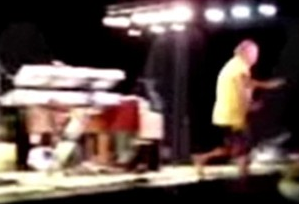 Officials at the concert at the Hordern Pavilion asked audience members to leave the auditorium as Buffett stayed on the floor in front of the first row of seating waiting for paramedics and an ambulance to arrive.

An audience member told the Daily Telegraph of Sydney that it appeared Buffett struck his head and was bleeding.

Another audience member in the front row told TMZ that Buffett was unconscious for five to 10 minutes and that he had a gash on his head. Paramedics arrived 15 minutes later.