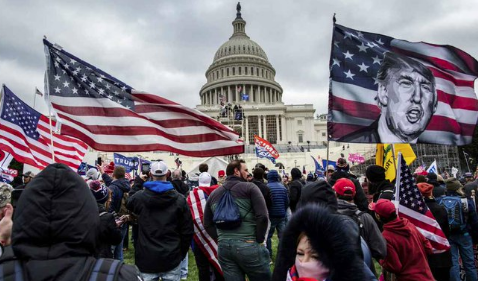 Bipartisan support is growing for an independent, September 11th-style commission to investigate the assault on the U.S. Capitol, with some lawmakers from both parties expressing backing for the idea on Sunday, one day after former President Donald Trump was acquitted in his Senate impeachment trial of incitement of insurrection. Democratic Senator Chris Coons of Delaware said in ABC's This Week, "There’s still more evidence that the American people need and deserve to hear and a 9/11 commission is a way to make sure that we secure the Capitol going forward." Senator Bill Cassidy of Louisiana -- one of seven Republican senators who voted to convict Trump -- said on the same show, "There should be a complete investigation about what happened. What was known, who knew it and when they knew, all that, because that builds the basis so this never happens again." Even GOP Senator Lindsey Graham, a close ally of Trump who voted for acquittal, favors the idea, saying on Fox News Sunday, "We need a 9/11 commission to find out what happened and make sure it never happens again."

Rep. Dean tells @GStephanopoulos "of course" there should be a 9/11-style commission for the Capitol riot: "An impartial commission, not guided by politics, filled with people who would stand up to the courage of their conviction." https://t.co/JX7346y1mo pic.twitter.com/FbRbDISByr


Trump Acquitted: Trump was acquitted Saturday in a Senate vote after both the House managers and his defense attorneys delivered their closing arguments. Lead House manager Rep. Jamie Raskin argued that Trump has betrayed his country, the Constitution and his oath of office, while Trump attorney Michael van der Veen charged the Democrats were attempting "constitutional cancel culture," and to punish the former president for protected First Amendment speech. The vote was 57-43 in favor of conviction, 10 short of the two-thirds needed to convict. However, seven Republicans voted with all the Democrats, the largest number to ever vote to find a president of their own party guilty during an impeachment trial. The seven were Cassidy and Senators Richard Burr of North Carolina, Susan Collins of Maine, Lisa Murkowski of Alaska, Mitt Romney of Utah, Ben Sasse of Nebraska and Pat Toomey of Pennsylvania.


Reactions: Senate Republican Leader Mitch McConnell voted against conviction, but he said it was on the grounds that he didn't believe the Senate could try a former president who was no longer in office. Despite his vote, he gave a searing speech from the floor of the Senate after Trump's acquittal in which he blamed the former president for the Capitol attack, saying he was, quote, "practically and morally responsible for provoking the events of that day," and that his actions surrounding the January 6th attack were, quote, "a disgraceful, disgraceful dereliction of duty."

Trump: Trump released a statement in which he blasted the Democrats and the impeachment, calling it "yet another phase of the greatest witch hunt in the history of our Country." He also indicated he doesn't plan to fade from the political scene, saying, "Our historic, patriotic and beautiful movement to Make America Great Again has only just begun. In the months ahead I have much to share with you, and I look forward to continuing our incredible journey together to achieve American greatness for all of our people."

Biden: President Biden released a statement in which he said, "While the final vote did not lead to a conviction, the substance of the charge is not in dispute," and then cited some of McConnell's critical words about Trump from his post-acquittal speech. Biden added, "This sad chapter in our history has reminded us that democracy is fragile. That it must always be defended. That we must be ever vigilant. That violence and extremism has no place in America. And that each of us has a duty and responsibility as Americans, and especially as leaders, to defend the truth and to defeat the lies."

➤AVERAGE DAILY NEW COVID CASES IN U.S. BELOW 100K FOR FIRST TIME SINCE EARLY NOVEMBER: Average daily new coronavirus cases in the U.S. have fallen under 100,000 in recent days for the first time since early November, and the number is down from a peak of some 250,000 in January. 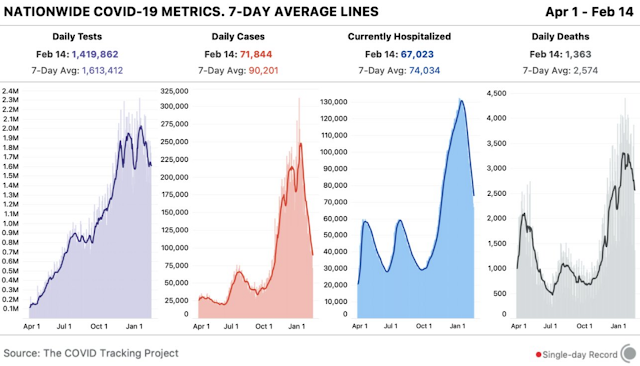 However, experts warn that the numbers are still high, with Centers for Disease Control and Prevention Director Dr. Rochelle Walensky saying on NBC's Meet the Press yesterday, "The cases are more than two-and-a-half-fold times what we saw over the summer. It’s encouraging to see these trends coming down, but they’re coming down from an extraordinarily high place." She also said that new variants of the virus, including the one first found in the U.K. that is more contagious, will likely lead to more cases and deaths, warning, "we can't let our guard down."
➤BIDEN CALLS FOR STRONGER GUN LAWS ON ANNIVERSARY OF PARKLAND SCHOOL SHOOTING: President Biden marked the third anniversary yesterday of the Parkland, Florida, school shooting in which 17 people, 14 of them students, were killed at Marjory Stoneman Douglas High School, saying, "Today, as we mourn with the Parkland community, we mourn for all who have lost loved ones to gun violence." Biden also used the anniversary to call on Congress to pass stronger gun laws, including a ban on assault weapons, requiring background checks on all gun sales, and eliminating immunity from liability for gun manufacturers.

➤ONE PERSON KILLED, FOUR INJURED IN TWO MALL SHOOTINGS: One person was killed and four were injured in shootings yesterday at two shopping malls, one in Phoenix and the other in North Charleston, South Carolina. In the Phoenix shooting at the Desert Sky Mall, two men were shot, apparently one a customer and the other a kiosk employee who exchanged gunfire after getting into an argument. Both were taken to the hospital with critical injuries, and one of the men later died. In South Carolina, police were looking for the gunman who wounded three people in Northwoods Mall. One of those wounded was in serious condition, while the other two had minor injuries. The shooting happened in a common area of the mall.

“All of Texas is facing an extremely dangerous winter storm.” Snow and ice storms are dipping into areas as far south as Texas’ Gulf Coast. Storms are also expected to deliver ice and up to 12 inches of snow across parts of the southern Plains. https://t.co/F1555oEVS0

➤MCDOWELL GETS UPSET WIN IN DAYTONA 500: Michael McDowell was the unexpected winner of the Daytona 500 yesterday, beating 100-to-1 odds to get the upset victory, his first win in 358 NASCAR Cup starts.

McDowell was right behind Brad Keselowski when Keselowksi tried to get around leader Joey Logano on the final lap. Logano went to block Keselowksi and crashed them both and other cars, but McDowell was able to go right through and nab the win. That stunning upset came after what had been a long day, with the race stopped by rain for almost six hours.

Take a look at the accident that brought out the caution flag at the end of the #DAYTONA500. pic.twitter.com/M7AUZJ1c1C

🎾DJOKOVIC, NADAL, HALEP, AMERICAN PEGULA INTO QUARTERFINALS AT AUSTRALIAN OPEN: Top-seeded Novak Djokovic and Roger Nadal and Simona Halep, the second-seeded man and woman at the Australian Open, have advanced to the quarterfinals by winning their fourth-round matches yesterday (February 14th). Also advancing was fourth-seeded men's player Daniil Medvedev, who defeated American Mackenzie McDonald. On the women's side, 61st-ranked American Jessica Pegula made it to a Grand Slam quarterfinal for the first time with her upset win over fifth-seeded Elina Svitolina 6-4, 3-6, 6-3.

🏀LAKERS' DAVIS TO HAVE MRI AFTER RE-AGGRAVATING ACHILLES: The L.A. Lakers' Anthony Davis will have an MRI today (February 15th) after re-aggravating his sore right Achilles in L.A.'s 122-105 loss to the Denver Nuggets yesterday. Davis thinks he may have suffered what the team said was an Achilles strain when he stepped wrong as he drove to the basket near the end of the first half. Davis had missed two games with right Achilles tendinosis before returning on Friday.

🏀NETS' DURANT TO MISS AT LEAST TWO GAMES WITH HAMSTRING STRAIN: The Brooklyn Nets' Kevin Durant will miss at least two games with a left hamstring strain, the team said Sunday (February 14th), describing the injury as mild. Durant had just returned Saturday after being out for a week because he had close contact with a Nets employee who tested positive for the coronavirus.
Posted 4:27:00 AM