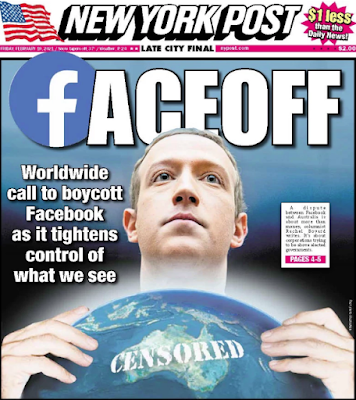 Australian officials say they’re forging ahead with efforts to make tech giants pay for news content even after Facebook imposed a media blackout there, The NY Post reports.

“We’ll be proceeding with the code,” Communications Minister Paul Fletcher told Australia’s ABC News on Thursday. “We want Google and Facebook to stay in Australia, but we’ve been very clear that if you do business in Australia you need to comply with the laws passed by the elected parliament of this nation.”

Fletcher joined other top officials in decrying Facebook’s decision to block Australian users from viewing or sharing news content on the platform.

The stunning move was a response to Australia’s proposed news media bargaining code, which would allow news publishers to negotiate payments from tech giants for the use of their content that appears in search results or news feeds.

Facebook’s blockade appeared aimed at news publishers, but it also blocked content from other entities including a government weather agency and state health department.

“Facebook’s actions to unfriend Australia today, cutting off essential information services on health and emergency services, were as arrogant as they were disappointing,” Australian Prime Minister Scott Morrison said on his own Facebook page. “We will not be intimidated by BigTech seeking to pressure our Parliament as it votes on our important News Media Bargaining Code.”

Fletcher said officials were continuing to discuss the proposed law with Facebook as the bill headed for a vote in Australia’s Senate after passing in the House of Representatives.

He noted that Google — which had threatened to shut off its search engine in Australia if the proposal becomes law — took the more conciliatory approach of making deals with news publishers including News Corp.

Early Thursday, “Delete Facebook,” “Boycott Zuckerberg” and “Facebook We Need To Talk” began trending on other social networks as anger over the move spread around the globe.

“If it is not already clear, Facebook is not compatible with democracy,” US Rep. David Cicilline (D-RI) posted on Twitter. “Threatening to bring an entire country to its knees to agree to Facebook’s terms is the ultimate admission of monopoly power.”