Wake-Up Call: In Texas..Power to The People 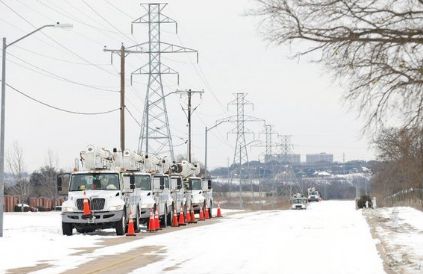 WATER STILL A PROBLEM FOR MANY: Many of the millions of people in Texas who were without electricity and heat for days after a winter storm brought record low temperatures finally got power back yesterday. The number without power was down to 325,000 homes and businesses, after having been three million a day earlier. However, rolling blackouts could return, utility officials said. There were still concerns with safe drinking water, with seven million people having been told Wednesday to boil tap water before drinking it after lines froze and water pressure dropped as many people left their faucets dripping to prevent pipes from freezing. Water problems were continuing yesterday, with Houston's mayor, for one, saying residents will likely have to keep boiling water for a few more days.

Why Texas' energy grid is unable to handle the winter storms. https://t.co/RJf8uIB4sy


➤SIX CAPITOL POLICE OFFICERS SUSPENDED, 29 UNDER INVESTIGATION FOR ACTIONS DURING CAPITOL ATTACK: Six U.S. Capitol Police officers have been suspended and 29 others are under investigation for their actions during the attack on the Capitol last month, department spokesman John Stolnis told CNN Thursday. Democratic Rep. Tim Ryan of Ohio said one of the suspended officers took a selfie with someone who was part of the attacking mob, and another wore a "Make America Great Again" hat and started directing people around the building. Capitol Police issued a vote of no confidence in the force's top leaders earlier this month in the wake of the January 6th attack. Officer Brian Sicknick was killed as a result of the attack, and two other officers committed suicide shortly after it happened.

➤ADMINISTRATION SAYS READY FOR TALKS TO RETURN TO IRAN NUCLEAR DEAL: President Biden's administration said yesterday that it's ready to take part in talks with Iran and other world powers about returning to the 2015 nuclear deal that former President Donald Trump withdrew the U.S. from in 2018. In related steps, the U.S. also reversed Trump’s determination that all U.N. sanctions against Iran had been restored, and eased restrictions on the domestic travel of Iranian diplomats at the United Nations. Rep. Michael McCaul, the ranking Republican on the House Foreign Affairs Committee, criticized the news, saying, "It is concerning the Biden Administration is already making concessions in an apparent attempt to re-enter the flawed Iran deal."

➤DEMOCRATS UNVEIL BIDEN'S IMMIGRATION LEGISLATION: Administration officials and congressional Democrats unveiled President Biden's proposed immigration legislation Thursday. The wide-ranging legislation includes things like an eight-year path to citizenship for those living in the country illegally, an increase in visas, greater funding for processing asylum requests, and more. However, Democrats signaled willingness to act on parts of the legislation separately, instead of insisting on trying to get the entire proposal passed.

U-S SENATOR CRUZ FACING BIG BACKLASH:  Senator Ted Cruz is facing major political backlash after he flew down to Cancun for a family vacation Wednesday as the Texas Republican's state is going through a crisis with millions without power, heat and drinkable water for days due to a winter storm that brought snow and record low temperatures that buckled its electrical grid. The uproar started when Cruz was spotted at the airport and on the plane and quickly built, and he ended up coming back the next day, telling reporters Thursday it was, quote, "obviously a mistake" to have gone. Cruz first said yesterday he'd gone with his family after his daughters asked to go on a trip with friends because school was canceled for the week, saying, "Wanting to be a good dad, I flew down with them last night and am flying back this afternoon."

Sen. Ted Cruz, back in Texas, says it was "obviously a mistake" to go to Cancun.

You can hear protestors chanting "Resign!" in the background. pic.twitter.com/FwA6Dsg4fv


But a New York Times report later in the day challenged that explanation. The Times was leaked a group text among Cruz's wife, Heidi Cruz, and some of their neighbors in Houston. In it, Heidi Cruz said their house was "FREEZING," as they lost power and heat too, and asked, "Anyone can or want to leave for the week?", and wrote about the prices and good security at the Ritz-Carlton in Cancun. The texts also showed the family planned to stay through the weekend. Cruz later acknowledged he'd intended to say longer, saying, "leaving when so many Texans were hurting didn't feel right, and so I changed my return flight and flew back on the first available flight." Cruz's actions drew bipartisan criticism and there was speculation it might hurt his potential plans to run for president again in 2024.

➤WHAT WILL IT TAKE FOR AMERICANS TO RETURN TO THE MALL?:  Malls in the U.S. were struggling long before the pandemic came along, and the pandemic was the nail in the coffin for some. But what would it take to revive malls? Malls are currently gearing up for the return to normal life. Leading into the pandemic, many mall owners had already started updating their properties with outdoor restaurants, fitness centers, grocery stores, and Uber and Lyft areas for pickup and drop-off. Analysts expect these types of changes to intensify this year. Vince Tribone is the senior retail analyst with the real estate research firm Green Street, and says, “The legacy mall model of having three or four department stores at a mall being the key traffic driver—those days are over. Malls are trying to adapt to the trends.” Some malls are also adapting to the current environment and are rolling out private work spaces where remote workers can reserve a quiet zone, and other malls are filling empty retail spaces with digitally native companies such as Casper, Warby Parker, and Peloton. As far as what Americans will do once they feel safe again—the jury is out—some predict we’ll partake in “revenge shopping and revenge spending” while others wonder if our shopping habits have been changed permanently since we’ve been home so long.
🏀LEBRON, DURANT TO BE ALL-STAR GAME CAPTAINS: The L.A. Lakers' LeBron James and the Brooklyn Nets' Kevin Durant will be the Western and Eastern Conference captains, respectively, in the NBA All-Star Game next month, revealed yesterday as having gotten the most votes in balloting for the game. The other starters for the West in the March 7th game in Atlanta are: Denver's Nikola Jokic; the L.A. Clippers’ Kawhi Leonard; Golden State’s Stephen Curry; and Dallas’ Luka Doncic. The other East starters are: Milwaukee’s Giannis Antetokounmpo; Philadelphia’s Joel Embiid; Washington’s Bradley Beal; and Brooklyn’s Kyrie Irving. Fan votes counted for 50 percent, player votes for 25 percent, and votes from a media panel for 25 percent.

🏀LEBRON BECOMES THIRD PLAYER WITH 35,000 POINTS: LeBron James became the third player in NBA history with 35,000 points last night, reaching the mark during the first half of his L.A. Lakers' game against the Brooklyn Nets. He is behind only career leader Kareem Abdul-Jabbar in first place and Karl Malone in second. However, at age 36, James is the youngest of them to have reached 35,000 points, with Abdul-Jabbar having done it at 38 and Malone at 39.

🏈REPORTS: EAGLES SENDING WENTZ TO COLTS: The Philadelphia Eagles have agreed to trade quarterback Carson Wentz to the Indianapolis Colts in return for draft picks this year and in 2022, according to media reports yesterday. Wentz just completed the worst season of his five-year career, leading him to be benched after 12 games in favor of rookie Jalen Hurts. The Eagles chose Wentz with the Number 2 overall pick in the 2016 NFL draft. In 2017, he led Philadelphia to a 11-2 record before his season was ended due to a knee injury. Nick Foles took over, and the Eagles went on to the win the Super Bowl.

"You're still my hero, you always will be. ... Colts fans, you really have a real one."


🎾DJOKOVIC TO PLAY FOR AUSTRALIAN OPEN TITLE AFTER WINNING SEMIFINAL: Top-seeded Serbian Novak Djokovic will play for the Australian Open title after winning his semifinal match against 114th-ranked Aslan Karatsev of Russia yesterday (February 18th). Djokovic dispatched Karatsev without too much trouble, defeating him 6-3, 6-4, 6-2. He will play the winner of today's semifinal between fourth-seeded Daniil Medvedev and Number 5 Stefanos Tsitsipas. Number 3 Naomi Osaka of Japan and 22nd-seeded American Jennifer Brady will play for the women's title on Saturday.

⚾BLUE JAYS' HOME GAMES WILL BE IN BUFFALO, FLORIDA AND TORONTO: MLB's Toronto Blue Jays are expected to split playing their home games during the upcoming season among their spring training complex in Dunedin, Florida, their Triple-A ballpark in Buffalo, New York, and their home stadium, the Rogers Center in Toronto. The division is due to Canadian government coronavirus restrictions. The Blue Jays played their home games during last year's abbreviated season in Buffalo.
Posted 4:34:00 AM