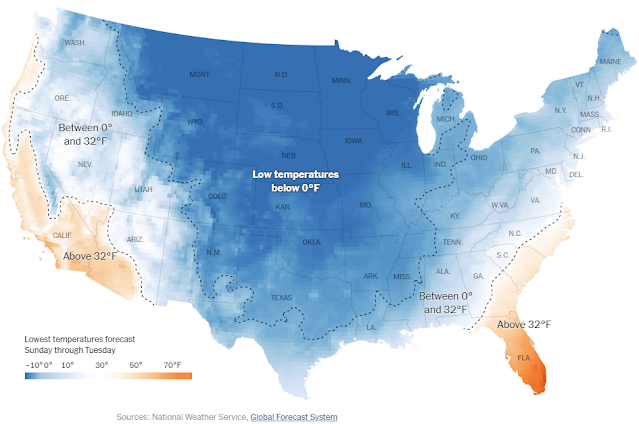 MILLIONS WITHOUT POWER IN RECORD COLD TEMPERATURES: At least 20 people have been killed as the result of a winter storm that's affected large swathes of the country and has also left millions of people without power in record cold temperatures, many of them in Texas, the South and other parts of the country that rarely get this kind of weather and whose infrastructure is ill-equipped to handle it. Among those killed were four people in one family who died in a house fire near Houston while they were using a fireplace to stay warm, at least two people killed by carbon monoxide while trying to stay warm in the car in their garage, three who died in a North Carolina tornado, and others killed in car crashes. Texas has been hit the most with power outages due to its overwhelmed power grid, with more than two million still affected, many for a second day in frigid temperatures without heat. Texas requested 60 generators from the Federal Emergency Management Agency and has opened 35 shelters.

AccuWeather Alert: Winter Storm Watch for snow on Thursday in NYC and the Tri-State https://t.co/UuAI0qnS02 pic.twitter.com/9FlIVy2je7


➤BIDEN TALKS VACCINES, COVID AID, SCHOOLS AND MORE IN TOWN HALL: President Biden answered questions about coronavirus vaccines, his Covid aid package, schools and more during a CNN town hall last night in Milwaukee, one day shy of him completing his first four weeks in office. Biden said that there will be enough supply by the end of July for every American to get the required two doses of the vaccine, and urged passage of his proposed $1.9 trillion Covid relief plan, saying, "Now is the time to go big." He also addressed the question of students returning to classrooms, saying he wants a majority of elementary schools to be open five days a week by the end of his first 100 days in office.

He also answered questions on topics including domestic terrorism in the wake of the attack on the U.S. Capitol, saying it's something his Justice Department will focus on, and policing, restating his position that he's not in favor of "defunding" the police, saying instead departments need more money to help improve community policing, and that he's hopeful about passing legislation to study police reforms.
President Biden made clear his position on forgiving student debt, saying he favors canceling $10,000 of student debt per borrower, not the $50,000 that many progressives want, among them Senate Majority Leader Chuck Schumer and Senator Elizabeth Warren. Biden restated his stance in response to a question from an audience member who said canceling $10,000 doesn't go far enough. Biden did say he supports making community colleges free for everyone and state colleges free for students whose families make less than $125,000 a year. He also spoke in favor of letting student loan borrowers work off some of their debt through doing public service in their communities.
And even though he brought up former President Donald Trump more than once, Biden expressed after being asked about the impeachment trial that he wants to move on from his predecessor, saying, "For four years all that's been in the news is Trump. The next four years I want to make sure all the news is the American people. I'm tired of talking about Trump."
➤WINTER STORM HURTS COVID VACCINE EFFORTS: The winter storm that has paralyzed parts of the country and left millions without power also hurt coronavirus vaccination efforts around the country yesterday (February 16th). Vaccine deliveries were delayed and vaccination appointments had to be canceled, even as the Federal Emergency Management Agency opened its first mass vaccination sites, in Los Angeles and Oakland, California. The administration also said yesterday that it's increasing the amount of vaccine sent to states to 13.5 million doses a week, a 57 percent increase from when President Biden took office. The Centers for Disease Control and Prevention says the U.S. is now administering an average of nearly 1.7 million doses per day. Nearly 39.7 million Americans, or about 12 percent of the population, have received at least one dose of the vaccine, and 15 million have gotten both shots.

➤REP. THOMPSON, NAACP SUE TRUMP, GIULIANI OVER CAPITOL ATTACK: Democratic Rep. Bennie Thompson of Mississippi and the NAACP filed suit Tuesday against former President Donald Trump and his personal attorney, Rudy Giuliani, over the January 6th attack on the U.S. Capitol, as well as the Proud Boys and Oath Keepers white extremist groups. The suit alleges that Trump incited the riot in violation of a Reconstruction-era law known as the Ku Klux Klan Act. The Act, passed to reduce violence against and intimidation of Black Americans by the Klan after the Civil War, protects against conspiracies meant, quote, "to prevent, by force, intimidation, or threat, any person from accepting or holding any office." Jason Miller, a spokesman for Trump, said in a statement, "President Trump did not incite or conspire to incite any violence at the Capitol on January 6th." He also said Giuliani, quote, "is not currently representing President Trump in any legal matters."
➤STUDY..CHEMICAL IN COCOA LINKED TO IMPROVED PERFORMANCE IN LIST-LEARNING TASKS:  Eating chocolate could have some good effects on you brain. A study paid for my Mars Inc. found flavanols—plant chemicals that are found in cocoa beans—improved performance in a list-learning task among people ages 50 and 75. Flavanols can also be found in red wine, green tea, olive oil, onions, leeks, broccoli, and blueberries, and other studies have found that flavanols can protect against cognitive aging, enhance cognitive performance, and boost blood flow to the brain. Still, researchers caution that chocolate is still just a treat and not a health food, and is generally low in flavanols. They also add that commercially available chocolate brands, like Mars bars, are “not a reliable source” of flavanols, though one experts notes they do tend to be abundant in dark chocolate. Mars Inc. released a statement noting, “Unfortunately, flavanols are destroyed when cocoa is processed into chocolate, making chocolate an unreliable source of these compounds.”
➤HARD PARTYING IN YOUR 20S RAISES YOUR RISK OF HEART PROBLEMS LATER BY NINE TIMES: Hard partying in your 20s can lead to heart problems later in life. Louisiana State University researchers looked at 1.1 million people in the U.S., comparing their intake of alcohol, drugs, and cigarettes with rates of heart attacks and strokes. They found the higher the number of substances used recreationally, the greater the risk of premature heart disease- this means having a heart attack, angina, or a stroke before age 55 in men, or before age 65 in women. For those who used four or more substances, the risk was nine times higher, and those who used cocaine were nearly two-and-a-half times as likely to have premature heart disease, while those who used amphetamines were nearly three-times as likely. Smokers were nearly twice as likely to suffer from premature heart disease, while drinkers were 50 percent more likely to face the disease. Lead study author Dr. Anthony Orr adds, “Studies suggest that one in five young adults misuse several substances and that these poly-substance users often start using at younger ages, and so have worse health over the long term. These people need to be aware of the long-term consequences for their health beyond the risk of an overdose.”

➤WHY LUNCH SHOULD BE THE DAY’S BIGGEST MEAL, ACCORDING TO EXPERTS: As a rule, Americans tend to make dinner the biggest meal of the day, but experts are saying lunch should really be the largest meal we consume. Patrick Okolo III, chief gastroenterology for Rochester Regional Health, says it’s important to note the implications of eating our largest meal latest in the day from a digestive standpoint, as well as overall health perspective as we don’t metabolize food as well as night because of the normal, natural rhythm of the body. Having our largest meal at night can lead to sleep disturbances as well, including acid reflux and other long-term digestive problems. Researchers also note that the midday meal was once the heaviest, and the shift towards evening came due to how and where we work. As Americans started commuting greater distances to work it became impossible to follow the older established tradition of going home midday to eat a large meal for lunch—so this naturally shifted the big meal to the end of the day when everyone in a household was home. Okolo says since everyone has different schedules we should just make sure our larger meal is timed for our most active time of day.
🏀FOUR SPURS PLAYERS POSITIVE FOR CORONAVIRUS: The NBA said Tuesday that four San Antonio Spurs players had tested positive for the coronavirus. As a result, the Spurs will not be playing any games until the middle of next week at the earliest, postponing at least three games. The league also said the Charlotte Hornets' next two games had been postponed while contract tracing is completed, because they were the last team to play San Antonio.

🎾TOP-SEEDED BARTY UPSET AT AUSTRALIAN OPEN, DJOKOVIC, WILLIAMS ADVANCE TO SEMIFINALS: Top-seeded Ash Barty of Australia was upset at the Australian Open yesterday, losing her quarterfinal match to Number 25 Karolina Muchova of the Czech Republic 1-6, 6-3, 6-2. Muchova will play 22nd-seeded Jennifer Brady in the semifinals, who beat fellow American Jessica Pegula in their quarterfinal. Number 10 Serena Williams will play third-seeded Naomi Osaka in their semifinal after Williams upset Number 2 Simona Halep in straight sets. On the men's side, top-seeded Novak Djokovic downed Number 6 Alexander Zverev in their quarterfinal, and will play Russian Aslan Karatsev in the semis. Fourth-seeded Daniil Medvedev beat fellow Russian Andrey Rublev, who was seeded seventh, and will play the winner of the match between Rafael Nadal and Stefanos Tsitsipas in the semifinals.
Fans Being Allowed Back: Fans will be allowed back starting Thursday at the Australian Open, after the Victoria government eased the restrictions it had put in place last Friday after Covid outbreaks in the region. Fans will be allowed in the stands at about 50 percent capacity. 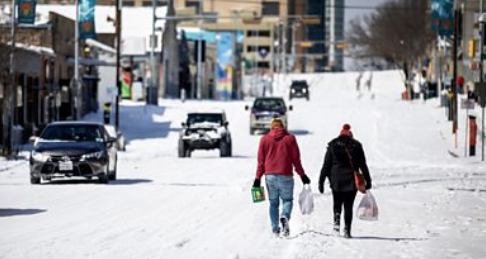 ➤WINTER STORM CANCELS NBA, NHL, COLLEGE BASKETBALL GAMES IN TEXAS: The winter storm that has brought snow and frigid temperatures to Texas and knocked out power to millions caused the cancelation of the scheduled NBA game tonight (February 17th) between the Dallas Mavericks and Detroit Pistons. An NHL game between the Dallas Stars and Nashville Predators scheduled for last night was also scrapped, the second in two days. The weather also caused the cancelation of several men's and women's college basketball games in Texas.

🏀TIMBERWOLVES RUSSELL TO HAVE KNEE SURGERY, MISS FOUR TO SIX WEEKS: The Minnesota Timberwolves' D'Angelo Russell will have arthroscopic knee surgery today and is expected to miss four to six weeks, with the team saying the procedure is being done to remove a loose body in his left knee. Russell had missed the previous three games with what had been described as a sore leg.

🏈EX-CLEMSON QB LAWRENCE HAS SHOULDER SURGERY: Former Clemson quarterback Trevor Lawrence, who's widely expected to be the Number 1 overall pick in the 2021 draft, had surgery on his left shoulder yesterday, which is his non-throwing arm, to repair damage to the labrum. He wrote on Instagram afterward, "Surgery went great. Excited to rehab." ESPN cited a source as saying Lawrence is expected to be ready for training camp.
Posted 4:25:00 AM