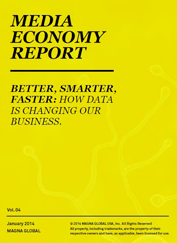 Magna Global issued a report on Monday predicting a major upswing of 8.3 percent for U.S. television advertising revenue in 2014, after a dismal 2013 in which revenues were down 0.6 percent. But, reports AdWeek,  there's been one significant change: national TV advertising is now smaller than digital media advertising.

The World Cup, local political advertising, and the Olympics are among the factors contributing to the uptick, said Vincent Letang, Magna's evp, director of global forecasting. Letang also predicted serious movement in the global mobile markets, among other trends—including that digital will surpass total TV by 2018.

"Elections make a huge difference for U.S. television," he said. "Television is resilient to digital media and [is] still stealing market share from other traditional categories. People are moving money out of print and putting it in digital but still some in television."

But the additions to digital are very significant. Indeed, said Letang, digital media is projected to increase by 15.9 percent globally this year—but only because a comparatively weak increase in nonmobile viewing (where the majority of the money currently is) of 8 percent drags down an incredible 61 percent jump in global mobile ads.

A few bullet points from the U.S. section of the report: