In 1962...WMCA 570 begins using “The Good Guys”.   Led by program director Ruth Meyer, the first woman to hold the position in New York City radio, this was the era of the high-profile Top 40 disc jockey with an exuberant personality aimed at a certain audience segment. With the advent of the Good Guys format, WMCA became more "on top" of new music and started to become known for "playing the hits."


In 1964...KDKA 1020 AM, Pittsburgh banned the song “Beans In My Ears” by the Serendipity Singers. The ban follows complaints from listeners and area doctors who claim that children have been putting foreign objects into their ears at an increased rate since the single was released.


In 1965...Since WINS went all-news in April, New York’s remaining rockershave been going at it - head to head. It’s the WMCA Goodguys Vs the WABC All-Americans. They’re the only two places on the New York dial to hear top-40.

The post-WINS Pulse ratings show the stations neck-in-neck - WABC at a 16 and WMCA at a 16.3 rating. But WMCA has about one-third the signal of WABC, so it performs better with no WMCA competition - in the outlying suburbs. 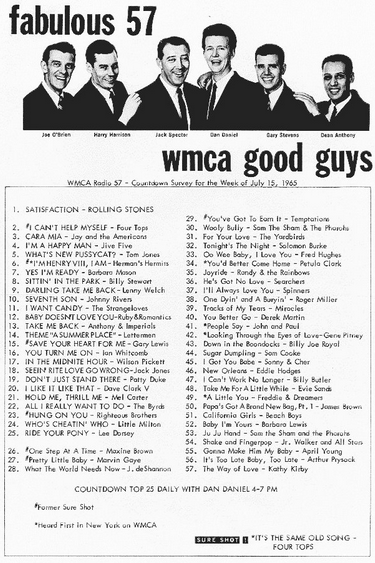 WMCA is running a “Good Guy Derby” contest where you have the guess theWMCA Good Guy who will win his race “in the sport of kings.” Go-Go radio, WABC is doing a “prize of the day” A prize a day goes into the “Go Go Grab Bag” for end-week awarding. Both stations are expected to do even better this year, not only because WINS is out of the game, but because more money will be spent on teens this summer in radio advertising. 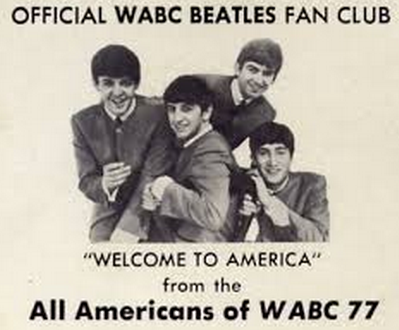 Both stations are battling airplay of the new Beatles album -“Beatles VI” - and both stations are saying they had the exclusive on the album.  Actually, WABC had the album three hours before WMCA did - a rarity. WMCA usually scoops WABC on most records, including the Beatles.

In 1966...WOR 98.7 FM says it will drop duplicating talk WOR 710 AM and go rock ‘n’ roll - the first FM station to go full-time rock . Date of change will be June 30. Robert S. Smith, vice president of both WOR AM/FMsays - “We will not have shouting disk jockeys on FM, but if there can be a qualityrock station, that is, what we will be. We’re going after the WABC and WMCAaudience.” The change in policy is a result of a recent FCC rule that FM stations in major cities may no longer duplicate more than 50% of their AM affiliates. 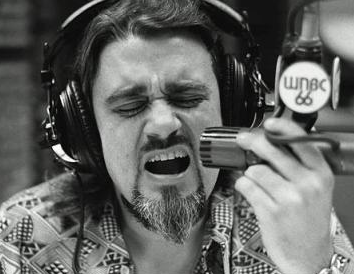 
In 1973...Watermark has produced a three-hour special called “the 40 Greatest Disappearing Acts of the Rock Era.” Hosted by Casey Kasem, it will replace American Top-40 July 7-8.


In 1973...93 KHJ AM program director Paul Drew confirms that the Real Don Steele and Mark Eliot have left the station.

In 1973...89 WLS  program director Tommy Edwards says the station is expanding its playlist and is cutting back on the use of jingles form 40 to five key jingles. Plus, - elimination of meaningless chatter by jocks, dayparting of music (more rock at night for example). Seems that WCFL is giving WLS a run in the ratings.

In 2005...legendary southern DJ, Mason Dixon, was injured in an auto accident which practically split his car apart.

In 2009…Radio/TV announcer Ken Roberts died of pneumonia following a stroke at age 99. In 1935, he was one of the founders of the broadcast performers' union now known as AFTRA.