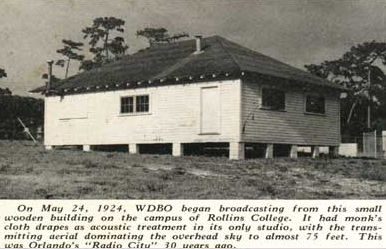 According to cflradio.net, WDBO began in 1924 as a physics class project. In May  E.F.  Wineberg, a Rollins College math, physics and engineering professor, launched  a 50-watt radio station in a small wooden building on the Winter Park campus.

The first night's programming - less than an hour - included talks by college officials, a violin solo and a performance by the men's glee club, according to the Rollins newspaper that week. It was the first radio station in Orange County and only the third in  Florida. WDBO operated at 1250 on the dial with 50 watts of power for thirty hours a week. There are some conflicting stories surrounding the call letters.

Rollins College decided the $600 budget to run WDBO was too much and gave the station to Col. George C. Johnston. Johnston was a radiologist from Pennsylvania who headed an investment bank called The Morris Plan, Co. Johnston named the corporation that took ownership of WDBO, The Orlando Broadcasting Company. 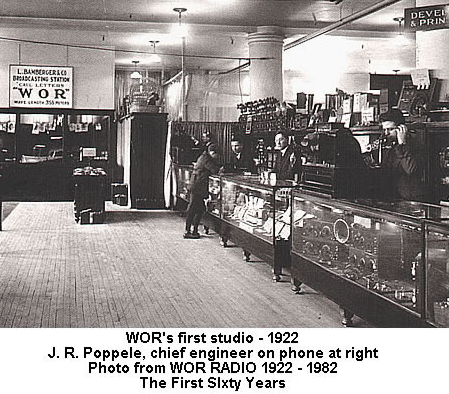 The station's first broadcast was made with a home made microphone which was a megaphone attached to a telephone transmitter, while Al Jolson's "April Showers" was played.  Louis Bamberger's sale of radio sets to consumers explained their affiliation with the station.

The WOR call sign was reissued from the U.S. maritime radio service. The station initially operated limited hours, sharing time with two other stations, WDT and WJY, which also operated on 833 kc. WOR changed frequency to 740 kc. in June 1923 and shared time with WJY until July 1926, when WJY signed off for good and WOR received full use of the frequency. In December 1924, WOR acquired a studio in Manhattan.

On June 17, 1927, as a result of General Order 40, WOR moved to 710 kc., the channel it currently occupies (unlike most stations, it was not affected by NARBA). Later in 1926, WOR moved from its New York City studio on the 9th floor of Chickering Hall at 27 West 57th Street to 1440 Broadway, two blocks from Times Square.