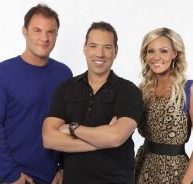 Premiere Networks announced Monday the addition of The Johnjay & Rich Show to its lineup of nationally syndicated programs. Beginning June 30, the company will assume distribution rights to the top-rated morning show, which will continue to originate from KZZP-FM in Phoenix, Ariz.

Airing Monday through Friday from 5 to 10 a.m. MT, The Johnjay & Rich Show is a non-stop blend of pop culture, news and events, welcoming a wide range of music artists, newsmakers and celebrities. Joined on-air by Kyle, the show is a special brand of "reality radio," with listeners engaged and interacting with the crew via every form of social media - Instagram, Snapchat, Twitter, Facebook, email and text messaging. Their style means humor comes from any and every direction.

"Premiere is such a good fit for our show, in that Premiere is carved in excellence," says Johnjay Van Es. "The best of the best, they sell, market and distribute great shows. They know what they are doing and we most certainly do not." Rich Berra adds, "Darren, Julie, Jenn and the crew at Premiere have all been around the morning show in one way, shape or form for decades now. We've wanted to work with Premiere to get the word out about our show forever. We are so excited about the possibilities and reach of this partnership."

Premiere Networks President Julie Talbott notes, "Johnjay and Rich have created a go-to destination for quality entertainment that wins across varied formats. They have a long, successful history in radio and we look forward to expanding their distinctive style and original, compelling content to additional markets across the country."
Posted 3:47:00 AM