In 1939…The radio detective series "The Adventures of Ellery Queen," starring Hugh Marlowe, began its nine-year run, with two stints on both CBS and NBC before its final season on ABC.


In 1948…In New York City, Columbia Records publicly unveiled its new long-playing phonograph record that turned at 33 1/3-RPM rather than the standard 78. Unlike 78-RPM discs, which held only three minutes of music on each side, the LP could hold a full 23 minutes per side.

In 1955...NBC’s Monitor program expands to 8 AM Saturday to Midnight Sunday.  According to the Monitor tribute site,  it had everything -- news, sports, comedy, interviews, remote pick-ups from around the world, music -- a true magazine of the air. Listeners could tune in or out at any time during the weekend, wherever they were -- at home or in their cars. During any "Monitor" hour, dozens of different people, places and things were presented -- all presided over, live, by hosts Weaver called "communicators" in mammoth New York studios NBC named "Radio Central."

If "Monitor" had failed, NBC Radio would have disappeared decades before it did. But it worked -- indeed, it was a smash hit with listeners, advertisers and critics. It quickly became NBC Radio's biggest moneymaker and almost single-handedly kept NBC in the radio business. Simply put, "Monitor" became the biggest thing in radio.


In 1965...The call letters of KYW-AM, Cleveland, Ohio returned to Philadelphia.

In June, 1955, Westinghouse agreed to trade KYW and WPTZ to NBC in exchange for the network's Cleveland properties, WNBK-TV and WTAM-AM/FM, as well as $3 million in cash. After clearing regulatory hurdles, the swap went into effect on February 13, 1956. According to phillyradioarchives.com, NBC changed the 1060 call letters to WRCV and Westinghouse moved the KYW call letters to Cleveland.

NBC had been interested in acquiring a VHF TV station in Philadelphia for years, the largest market in which it did not own one.  After being rebuffed more than once, NBC (according to Westinghouse) threatened to drop its network affiliation (and programming) from WPTZ and Westinghouse's Boston TV station unless they agreed to the trade.

Not long after the station swap in 1955, the government started an investigation into the transfer that ultimately led to a bitter and complex 10 year skirmish for control of the stations. The battle involved a large list of government and corporate players including the FCC, Congress, Department of Justice, RCA, Philco, Westinghouse and RKO-General. Ultimately, the swap was reversed, and Westinghouse regained control of the stations, renaming them KYW TV and KYW AM.


In 1974...Will Lewis - General Manager of Pacifica’s KPFK in Los Angeles is jailed for contempt of court after he failed to turn over to a federal grand jury the original tape-recorded message the station received from fugitive newspaper heiress Patty Hearst. The tape was received by the station last week from Miss Hearst and Emily and William Harris - and contained references to the May 17 South Central Los Angeles shootout in which six SLA members were killed.

NBC launched the NBC News and Information Service (also referred to as "NIS"), which provided up to 55 minutes of news per hour around the clock to local stations that wanted to adopt an all-news format. Not surprisingly, NIS achieved clearances on NBC's FM stations in New York (WNBC-FM, which became WNWS), Chicago (WJOI, the former WMAQ-FM which was renamed WNIS) and San Francisco (KNAI, the former KNBR-FM). WRC in Washington also picked it up, migrating their Top 40 format onto FM sister station WKYS (which would be blown up weeks later in favor of disco music). Other major affiliates for the NIS service included WBAL-FM in Baltimore, KHVH in Honolulu, and KQV in Pittsburgh.

The NIS service attracted several dozen subscribers, but not enough to allow NBC to project that it would ever become profitable, and it was discontinued after two years.   After the demise of NIS, NBC installed a talk radio format at WRC and went with music on the FMs in New York, Chicago, and San Francisco, respectively renaming them as WYNY, WKQX, and KYUU.

In 1984...KHJ AM Los Angeles is gearing to go what it calls “Car Radio.” Look for a lot of traffic along with music.

In 1984...Alan Berg, a combative radio talk show host at KOA radio in Denver dies of multiple gunshot wounds after being ambushed outside his condominium. Berg (50) had reported death threats to police several times. 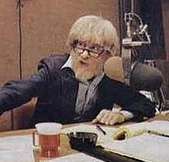 Alan Berg once worked at a shoe store and later opened a clothing store in Denver where he met KGMC-AM talk show host Laurence Gross. Impressed with Berg, Gross made him a guest on several occasions. When Gross left KGMC to take a job in San Diego, California, he requested that Alan Berg be named his successor.

From KGMC, which changed its call sign to KWBZ, Berg moved to KHOW, also in Denver. After being fired from KHOW, Berg went back to KWBZ before it changed to an all-music format and he again lost his job. The unemployed Berg was courted by both KTOK in Oklahoma City, Oklahoma and Detroit, Michigan. He was lastly hired by KOA and debuted on February 23, 1981. He worked at KOA until his death.

At about 9:30 p.m. on June 18, 1984, Alan Berg returned to his Adams Street townhouse after dinner. Berg stepped out of his black Volkswagen Beetle and gunfire erupted. He was struck twelve times. The murder weapon, a semi-automatic Ingram MAC-10, which had been illegally converted to an automatic weapon, was later traced to the home of one of The Order's members by the FBI.

Berg was on a death list according to a former producer because he was Jewish and he challenged on the air the beliefs of an author who wrote that Jews were from the family line of the devil.

Four members of The Order were ultimately indicted on federal charges: Jean Craig, David Lane, Bruce Pierce, and Richard Scutari. However, only Lane and Pierce were convicted, though neither of homicide (which is a state crime).  Rather, they were convicted of racketeering, conspiracy, and violating Alan Berg's civil rights (which are federal crimes). Both were sentenced to what were, for all practical purposes, life terms; Lane's sentence was 190 years; Pierce's was 252 years.

WKBW was founded in 1922 as a religious station, operating at the frequency of 1380 kHz. As the story goes, founder Clinton Churchill applied to the Department of Commerce for a license to operate under the call signs WAY. That call sign, however, was being used for a ship at sea, so instead, Churchill chose the letters "WKBW," which were next in the random assignment pool. Churchill proclaimed the call letters to stand for "Well Known Bible Witness"; later usage referred to the middle letters "KB" standing for King of Buffalo (alluding to its 50,000 watt broadcast power).

On July 4, 1958, WKBW radio abandoned its adult approach and was converted into a personality-driven full service Top 40 music radio station, featuring foreground personalities, a tight playlist of current hits and an aggressive local news department, which it continued to program with great success for over 20 years. It was one of the first stations to present traffic reports in cooperation with police and state and local authorities. Capital Cities Communications, then known as Capital Cities Broadcasting, purchased the WKBW stations from Clinton Churchill in 1961. 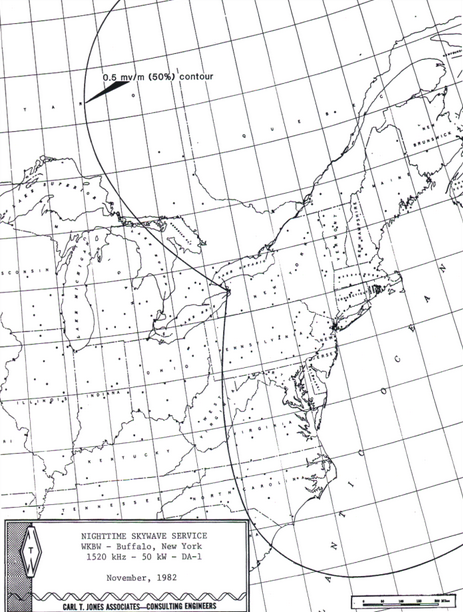 During the late 1950s, 1960s and 1970s, WKBW became a major force in pop radio over the East Coast. KB had a 50,000 watt transmitter at their transmitter site in Hamburg. This high power with a direction signal caused WKBW to blanket the entire eastern U.S. with top 40 music every night, and the station actually had a better signal at night in the western Boston suburbs than Boston's own top 40 station, WMEX, located at 1510, right next door to WKBW.