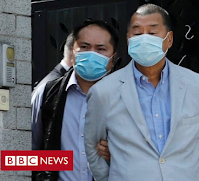 Hong Kong’s top court has remanded media and publishing tycoon Jimmy Lai, the most high-profile person to be charged under the Chinese-ruled city’s national security law, in custody until another bail hearing on Feb. 1.

Reuters reports the Court of Final Appeal’s ruling comes a week after Lai, one of Hong Kong’s most prominent democracy activists who is accused of colluding with foreign forces, was released on HK$10 million ($1.3 million) bail along with extensive restrictions that included barring him from using social media.

Beijing imposed the legislation on the former British colony in June that critics say aims to crush dissent and erode freedoms in the semi-autonomous, Chinese-ruled city - charges that authorities in Hong Kong and China reject.

Lai, a critic of Beijing who had been a frequent visitor to Washington, is widely believed to be a target of the new legislation.