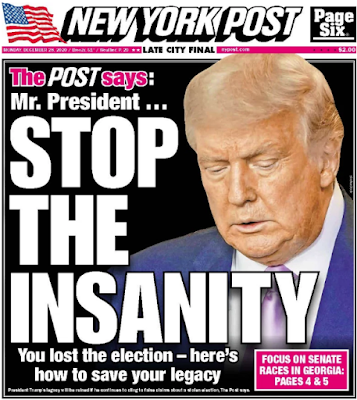 The cover of Monday’s metro edition read: “Mr. President…Stop the Insanity.” The editorial, titled “Give it up, Mr. President,” was posted online Sunday evening. It encouraged Trump, who has yet to accept the results of the 2020 election or concede that he lost to President-elect Joe Biden, to leave the White House peacefully and offered tips for how he could preserve his legacy and reputation.

The Post’s editorial board outright accused the president of cheering “for an undemocratic coup.”

It went on, citing specific examples of the “coup” and its failures by the Trump legal team, which has filed dozens of lawsuits in an effort to overturn the election. The editorial even singled out Trump lawyers and allies to criticize by name: “You had every right to investigate the election. But let’s be clear: Those efforts have found nothing. To take just two examples: Your campaign paid $3 million for a recount in two Wisconsin counties, and you lost by 87 more votes. Georgia did two recounts of the state, each time affirming Biden’s win. These ballots were counted by hand, which alone debunks the claims of a Venezuelan vote-manipulating Kraken conspiracy. Sidney Powell is a crazy person. Michael Flynn suggesting martial law is tantamount to treason. It is shameful.”

The Post encouraged the President to abandon baseless reelection claims and told him to instead focus on the two Senate races in Georgia that could flip the Senate.

The editorial ended: “Securing the Senate means securing your legacy. You should use your considerable charm and influence to support the Georgia candidates, mobilizing your voters for them. Focus on their success, not your own grievances, as we head into the final week. If you insist on spending your final days in office threatening to burn it all down, that will be how you are remembered. Not as a revolutionary, but as the anarchist holding the match.”