The AM Confidential: Good Riddance To 2020 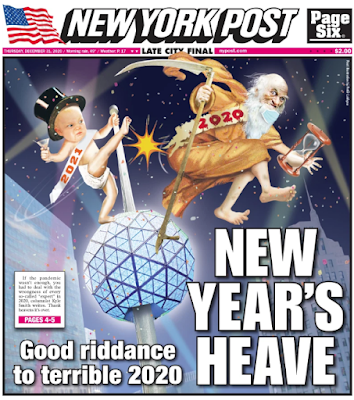 As you might expect, the plague-infested year 2020 is going to go out like a damp squib tonight. The New York Times checked out the New Year's Eve plans for some of the world's great capitals: 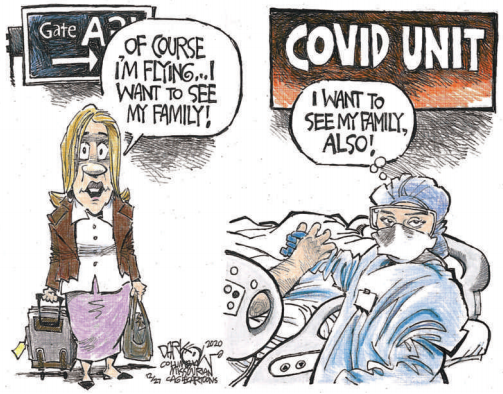 McCONNELL CRUSHES HOPES FOR BIGGER CHECKS:  Senate Majority Leader Mitch McConnell crushed hopes of an increase from $600 to $2,000 in the checks being sent to Americans struggling during the coronavirus pandemic, at least anytime soon. The Kentucky Republican said the Senate will consider only "smart targeted aid, not another fire hose of borrowed money." He has refused to bring the bill, approved by the House of Representatives, to the floor of the Senate as a standalone measure, offering it only in combination with two measures that he knows Democrats will not support.

The facts are clear: Pennsylvania had a free, fair, and secure election.

Fictional conspiracy theories like those spread by US Senator Josh Hawley violate the core values of our nation and we must reject them. pic.twitter.com/OS7wyOgOCQ


➤CHALLENGE TO BIDEN'S VICTORY ASSURED: U.S. Senator Josh Hawley of Missouri has announced he will challenge President-elect Joe Biden's victory in Pennsylvania when Congress meets January 6th to certify the election. Hawley's move will force members of the House and Senate to go on the record for or against accepting Biden's victory. Senate Majority Leader McConnell reportedly wanted to avoid that scene. The challenge is widely considered to be doomed to failure.


➤SERIAL KILLER DIES IN PRISON: Samuel Little, believed to have been the worst serial killer in American history, has died at the age of 80. Little was serving multiple life sentences for three murders in Los Angeles in the 1980s, but later confessed to more than 90 murders across the nation.

At the current rate, it would take almost 10 years to vaccinate enough Americans to get the pandemic under control, @NBCNews analysis shows. https://t.co/gLCcbrn1Hi


➤NOT QUITE WARP SPEED: The government official in charge of Operation Warp Speed, which aimed to ship 100 million doses of the new Covid-19 vaccines nationwide by the end of the year, acknowledged yesterday that the results didn't live up to the name. Only about 14 million doses shipped, and about 2.6 million people were actually vaccinated. Moncef Slaoui, chief science adviser of the project, blamed the holidays, the weather, storage challenges and inexperience for the slow rollout. A better pace is expected by mid-January.
In Florida, elderly people and frontline healthcare workers camped out overnight for vaccinations offered on a "first come, first served" basis. The process of vaccination is being set by the states.

➤MINIMUM WAGE SET TO RISE IN 20 STATES: Minimum-wage workers in 20 states will see small increases in their paychecks after January 1st. The minimum wage increases range from a measly eight cents an hour in Minnesota to $1.50 an hour in New Mexico. The states raising pay rates include Alaska, Arizona, Arkansas, California, Colorado, Florida, Illinois, Maine, Maryland, Massachusetts, Minnesota, Missouri, Montana, New Jersey, New York, Ohio, South Dakota, Vermont and Washington. Among those states, the highest pay rate, $14 an hour, is in California.
➤RECORD HIGH FOR STOCK PRICES: The Dow Jones Industrial Average hit another record high yesterday on the second to the last day of the trading year. The Dow gained nearly 74 points to close at 30,409. Market watchers say stock buyers are happy that the $600 stimulus checks are going out now, and hopeful about the prospects for an improved economy in 2021.

Oil set for 20% drop in 2020 as lockdowns weigh https://t.co/orMlzspvUT pic.twitter.com/Et4IhnWpT0

➤STUDY: TELLING YOURSELF TO FORGET SOMETHING HELPS TO MAKE ROOM IN YOUR BRAIN FOR MORE PRODUCTIVE THOUGHTS: Telling yourself to clear your mind, either out loud or in your head, can help your brain make room for more productive thoughts. U.S. researchers found that telling yourself to “clear” your mind, “suppress” a thought, or “replace” a thought with something else all successfully removed and manipulated unwanted information from one’s “working memory.” Your working memory is responsible for temporarily holding and processing information that comes into your brain, which is essential for cognition. The experts say that removing thoughts from this area of the brain is equally important. The new findings could inform new therapies for issues such as post-traumatic stress disorder and obsessive-compulsive disorder. Professor Marie Banich at the University of Colorado adds, “[…] If you want to get something out of your mind quickly use ‘clear’ or ‘replace,’ but If you want to get something out of your mind so you can put in new information, ‘suppress’ works best.”
➤WHY SETTING GOALS IS GOOD FOR YOU (EVEN IF YOU DON’T ALWAYS MEET THEM): New Year’s is a time people often set goals for themselves for the upcoming year, and science has proven that setting goals—whether you reach them or not—improves your productivity, satisfaction and perspective. Mental health expert Emily Rivera says creating goals engages the reticular activating system within our brain, which organically promotes the engagement and attention necessary to recognize the steps and opportunities that help us reach our goals. If we don’t set goals we fail to get the benefits of using this part of our brain, and can therefore get more easily distracted and lose the motivation needed to create the life we want. Additionally, setting a goal helps establish a system of accountability as well as helps measure progress over time. If you do not meet your goal, that’s ok too. Rivera says failing makes us actively discern between what worked and what didn’t so we can try a different, more efficient way the next time. Also, licensed marriage and family therapist Jenny Black says failing and learning from it might provide more value than continually achieving as sometimes failing delivers us something we need rather than what we want—and teaches us an essential lesson in acceptance in the process.

➤DUNKIN’ INTRODUCING ‘EXTRA CHARGED COFFEE’ WITH 20% MORE CAFFEINE: Dunkin’ wants you to run even faster on its coffee with the new “Extra Charged Coffee.” It’s available at participating Dunkin’ locations now, and contains 20 percent more caffeine than regular coffee that comes from the addition of green coffee extract. For a limited time through January 26th, each Extra Charged Coffee drink will cost only $2. Dunkin’ is also introducing two completely new coffee blends: Dunkin’ Explorer Batch (a medium roast featuring “dark berry notes and a smoky finish”), and Dunkin’ Midnight (a dark roast with “inherent sweetness and bold, chocolatey flavor notes.”) The Explorer Batch is said to be the first in the brand’s new Limited Batch Series, while Dunkin’ Midnight will be replacing the chain’s current Dark Roast offering. Dunkin’ has also announced its latest snack items for 2021, including a Dunfetti Donut (basically a Funfetti cake doughnut) which is currently available at participating locations, and a gluten-free brownie option. Returning snack items to expect include: Croissant Stuffers, Stuffed Bagel Minis and Snackin’ Bacon.

The Oklahoma Sooners defeated the Florida Gators by a score of 55-20. The 55 points are an Oklahoma Bowl Game record and ties the Cotton Bowl Record (USC 1995).

The 35-point scoring margin is also the highest the team has had in a Bowl Game in their 112-year history. pic.twitter.com/V4n66KarB5

🏈BADGER BUSTS BOWL: The Wisconsin Badgers captured the Duke's Mayo Bowl, but they're still going home empty-handed. Badgers quarterback Graham Mertz dropped the football-shaped hunk of Lenox crystal and shattered it into a thousand pieces while dancing around the locker room celebrating the team's 42-48 victory over Wake Forest yesterday. Wisconsin coach Paul Chryst was philosophical. "We just wanted everybody to have a piece of that trophy," he joked. Oh, these freshmen.
🏀NO NEWS IS GOOD NEWS: Pro basketball has come out of the bubble and so far, so good. The NBA announced that 495 players have been tested for COVID-19 since December 24th, and none tested positive. The teams have resumed a modified version of their normal schedule after completing the 2019-2020 season in a Disney World bubble.

🏈DALVIN COOK TO MISS VIKINGS' FINALE: Minnesota Vikings running back Dalvin Cook will not play in Sunday's game against the Detroit Lions due to the death of his father, ESPN reports. He flew home to Miami on Tuesday to be with his siblings.

➤MICHIGAN OPENS DOOR TO COLLEGE ATHLETE PAY: Michigan Governor Gretchen Whitmer has signed a bill that will allow college athletes to accept payment for sponsorships and advertising without risking their eligibility. The new law takes effect in 2023, the Detroit Free Press reports. Similar bills have been approved in California, Colorado, Florida, Nebraska and New Jersey, but other states still bar students participating in varsity sports from receiving anything of value other than scholarships.

🏎SIR LEWIS TO YOU: Formula 1 World Champion auto racer Lewis Hamilton has been awarded a knighthood by Great Britain's Queen Elizabeth II. The annual honors list was released last night. It has been a big year for Hamilton, who matched Michael Schumacher's record of seven F1 World Championship titles. You may now address him as Sir Lewis Hamilton.
Posted 4:26:00 AM