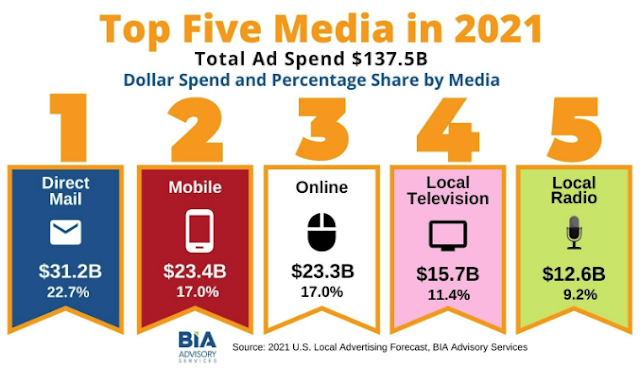 BIA’s recent forecast for 2021 shows Radio as #5 among the top five ad media for local spending. Mobile (smartphones, tablets) and Online (desktops, laptops) claim the #2 and #3 positions. According to BIA Advisory Service, if one was to combine the spending across these three media categories, radio averages 25.9 percent of that spending in the top 5 markets compared to Google’s 53.6 percent average share of this spending. That means Google wins 2x radio’s share. That means that every percent point of spending radio sellers can win away from Google is like getting a 2 percent share increase of radio spending in the market. That’s the 2x equation.

Can radio sell successfully against the Google-Facebook duopoly in 2021? If they can, they would address the larger market opportunity rather than just selling against other radio stations and potentially tap into a steeper revenue growth curve.

If so, that nice multiplier effect awaits. Across the top five markets, radio’s average share of the Radio+Google+Facebook total spending varies a fair amount. As displayed in the chart below, Dallas (26.9 percent) wins the greatest percentage of combined Radio+Google+Facebook sales and San Francisco (20.4 percent) trails. And of course converting Google dollars to radio dollars means higher margin sales. Winning similar amounts from Facebook spending just sweetens the pie for radio and increases the multiplier effect. 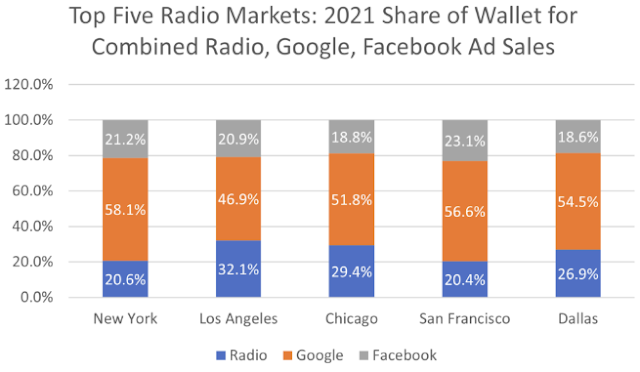 Some markets clearly are stronger radio markets. What’s the secret formula? Crack this code and tap into more radio growth.

Radio sales strategies focused on winning spending away from Google and Facebook dramatically upsize radio’s total addressable market. Going to a client and converting even one percent of their Google spending into more radio spending by showing how they can actually increase ROAS and digital KPIs that way is a huge win for radio. The research is there to back this up. Check out RAB’s study, Radio Drives Search Radio, as one recent example.
Posted 3:14:00 AM