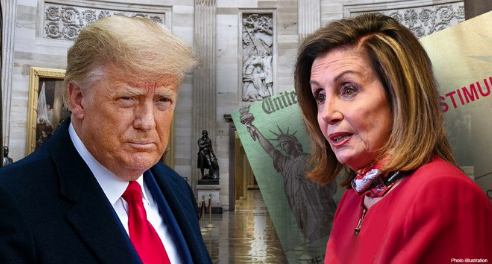 After fuming for days that it was "a disgrace," President Donald Trump signed the pandemic relief bill last night, clearing the way for a $600 check to millions of Americans and extended unemployment benefits for millions more. He wanted to boost the checks to $2,000. The bill also will replenish a small-business loan program and help states distribute the coronavirus vaccines.

Not incidentally, the bill also includes general government funding through the remainder of the fiscal year.

Because the president delayed signing the bill from Saturday until Sunday, unemployed Americans probably will not receive the enhanced unemployment payments this week but will have to wait until next week.

In a statement, the president said he was again demanding that Congress consider boosting the payment to Americans to $2,000 and removing various items he considers wasteful from the budget bill.

WOW. Check out this video Metro Police released of the #NashvilleBombing https://t.co/FaNdksQF7X


➤PERSON OF INTEREST' IN NASHVILLE BOMBING IS DEAD: A man named Anthony Quinn Warner, age 63, has been identified as the Nashville bomber after remains found at the scene were matched to him through DNA testing. Warner, of Antioch, Tennessee, was the only person killed by the van explosion in downtown Nashville in the early hours of Christmas morning. According to The Tennessean, Warner had worked in Nashville for many years, sometimes as a burglar alarm specialist and most recently as a computer technician for a local real estate firm.

➤SOLDIER CHARGED IN ROCKFORD MURDERS: Police say Duke Webb, an Army special forces sergeant, was the gunman who killed three people and injured three others in a random shooting spree inside and outside the Don Carter Lanes bowling alley in Rockford, Illinois, on Saturday night. Only a bar and a carryout food service were open at the complex, according to the Rockford Register Star. Webb is in custody. He was on leave from Eglin Air Force Base in Florida, where he is attached to 3rd Battalion, 7th Special Forces Group (Airborne).


➤FAUCI WARNS OF POST-CHRISTMAS SURGE: Dr. Anthony Fauci says he is optimistic about the pace of vaccine distribution, but he warns that next month may be the most challenging yet in the coronavirus pandemic. On CNN's State of the Union yesterday, the nation's top epidemiologist said he feared "a surge upon a surge" of coronavirus infections following Christmas and New Year's gatherings. Last week, a record average of 189,579 new daily COVID-19 infections were recorded in the U.S., and 2,250 deaths, according to a CNBC analysis of data compiled by Johns Hopkins University.

➤DON'T FORGET YOUR VACCINE PASSPORT: We all hope to resume our normal activities in 2021, but we may need to get used to carrying a "vaccine passport" in order to do so. Several companies are working on phone apps that will be used to create digital credentials verifying that a person has been vaccinated against COVID-19. The app may be used not just to get on an airplane but to enter a concert venue, a stadium or a movie theater.

Liberal media blasted for ignoring the Hunter Biden investigation: “A low point for the media... the press has done a horrible job on this from day one,” says Fox Business host @CGasparino pic.twitter.com/nxbmUG1QwG


➤THAT'S THE WAY THE MONOLITH CRUMBLES: A mysterious 10-foot-tall monolith appeared in a San Francisco park just in time for Christmas. It was just like the spooky monolith that popped up in a remote spot in the Utah desert recently. Others appeared just as suddenly in Romania and in Southern California. But the new one in San Francisco was special. It was made of gingerbread and decorated with white icing and gumdrops. Unfortunately, the cookie, or the monolith, crumbled on Saturday, according to KGO-TV.
➤EXPERTS PREDICT POP SONGS WILL BE SHORTER IN THE FUTURE AS ATTENTION SPAN LENGTH DROPS: By the time 2030 rolls around, experts say pop songs will likely be shorter. Researchers from Samsung found that the attention span of music fans dropped from 12 seconds to eight since the year 2000, so it’s harder than ever for musicians to draw listeners in early while also keeping the song short with the choruses happening early on. Samsung writes in a blog post, “At the end of the decade it’s predicted that the average song will be a maximum of two minutes, putting the old three-minute pop song cliché to rest.” Even today, among the ten most-streamed songs on Spotify, 80 percent are shorter than four minutes. Other research has shown that the length of the average number one song has decreased by nearly 20 percent over the past 20 years.

FINAL: The @packers earn their 12th win of the season! #GoPackGo #TENvsGB

🏈NFL SCORES -- WEEK 16:
Tonight's Monday Night Football game on ESPN:
🏈BRADY BOUNCE FOR TAMPA BAY: The Tampa Bay Buccaneers are going to the NFL playoffs for the first time since 2007, thanks to Tom Brady. The quarterback threw for 348 yards and four touchdowns in the first half Saturday, ending in a 47-7 rout of the Detroit Lions. Brady could afford to sit out the second half after breaking a Bucs record of 34 passing touchdowns in a season.


🏈SEAHAWKS CLINCH NFC WEST TITLE: The Seattle Seahawks defeated the Los Angeles Rams 20-9 yesterday to take their first NFC West division title since 2016. They close out the regular season with a game against the San Francisco 49ers in Glendale, Arizona, this Sunday.

🏀TIMBERWOLVES' TOWNS SIDELINED: Minnesota Timberwolves star Karl-Anthony Towns is out indefinitely after dislocating his left wrist during the game against the Utah Jazz on Saturday night. It's the same wrist he fractured last season, but surgery is not expected to be needed.

🏀HOW BAD WAS IT FOR THE CLIPPERS? The Los Angeles Clippers lost so badly to the Dallas Mavericks yesterday that the team set a record for the biggest halftime deficit in an NBA game since the shot-clock era began in the 1954-1955 season, according to Yahoo! Sports. The score at halftime was 77-27. It didn't get better. The final score was 124 Mavericks, 73 Clippers.

🎾FEDERER WILL MISS AUSTRALIAN OPEN: Roger Federer is still in rehab from knee surgery and will not make it to the Australian Open. He hasn't played in a tournament since last January's Australian Open but is hoping for a comeback in late February 2021. The 2021 Australian Open has been pushed back to February 8th. 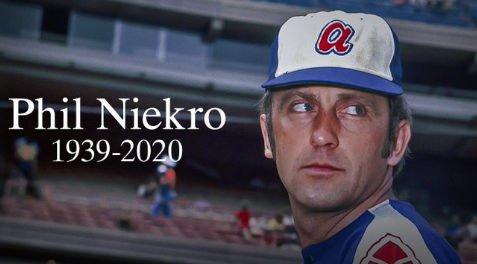 ⚾HALL-OF-FAMER NIEKRO DIES AT 81: Baseball Hall of Fame pitcher Phil Niekro has died at the age of 81. The Atlanta Braves announced his passing yesterday. Niekro's career spanned from 1964 to 1987, including 20 seasons with the Milwaukee/Atlanta Braves. He earned the nickname "Nucksie" for his signature knuckleball.
Posted 4:41:00 AM