The number of new smartphones activated on Christmas Day fell 23% from a year earlier, according to a report by mobile analytics firm Flurry. It attributes the decline to people having less money thanks to the disruptions caused by Covid. Smartphone sales have been weak all year, according to earlier reports from Gartner. 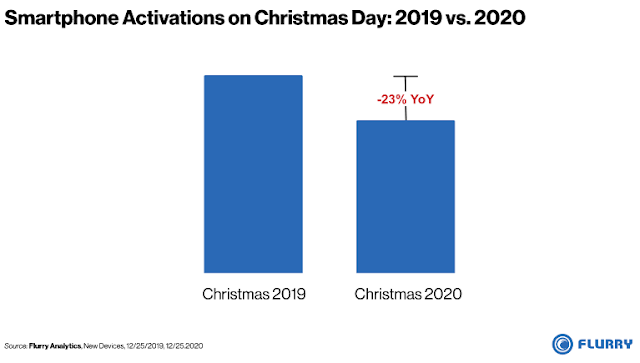 What’s most interesting about the latest reports, though, is what it says about the relative popularity of Apple’s newest iPhones. Flurry’s data shows that the most popular phone being activated last Friday was the iPhone 11, a year-old model, while the XR—which came out in 2018—was the second most popular. The newest iPhone 12 models ranked third and fourth. That may reflect widespread consumer attitudes—seen in online reviews—that the 11 models perform better than the 12s, thanks in part to better battery strength. The 12 line’s selling point was 5G capability. But 5G networks are still nascent in much of the U.S.