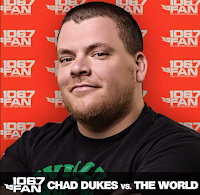 D-C Sports-radio host Chad Dukes is attempting a comeback with a new show, according to The Washingtonian citing a video he recently posted on his website.

In October, Dukes was fired from 106.7 the Fan for what its parent company, Entercom, described as “racist and other inappropriate comments” that he made on his podcast. Dukes went silent after his firing, but in the video he announces that he’ll be returning with something called the Chad Dukes Show.

A countdown clock underneath the video suggests the new show will launch at 9 AM on Jan. 11. “Hello, friendos,” he says in the low-production-value clip. “It’s Chad Dukes. It’s been a long time.” Dukes does not address the events surrounding his firing or offer further details about the new program.

Entercom has never said what the comments were that prompted Dukes’ firing, although many fans believe it was a segment from the September 14 episode of the Big O and Dukes. That podcast went on “indefinite hiatus” after Dukes was let go, according to its Facebook page.

Before he lost his job, Dukes was one of DC’s most prominent sports-media figures. He has been a fixture on the Fan since 2007, hosting several shows, including one with former Washington Football Team star LaVar Arrington in 2009.