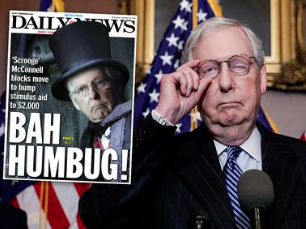 The Senate adjourned for the day yesterday without taking any definitive action on a House measure that increases the planned $600 direct payment to Americans to $2,000 as part of the coronavirus relief package. As expected, Senate Majority Leader Mitch McConnell blocked a Democratic-led move for an immediate vote on the measure. He has given no signal as to whether or how he will allow a vote on the increased checks. He introduced one measure that combined the bigger check with a repeal of social media legal immunity and creation of an election fraud panel. This combines several demands from President Donald Trump and is seen as having zero chance of approval.

President Trump has managed to get Senate Majority Leader Mitch McConnell to introduce a bill calling for a complete repeal of Section 230 of the Communications Decency Act, stripping tech giants of immunity from liability for what users post, according to Politico. The move seems, however, to be more political theater aimed at mollifying Trump than anything real. McConnell paired the repeal with a proposed increase in stimulus payments, something Republicans seem unlikely to support. 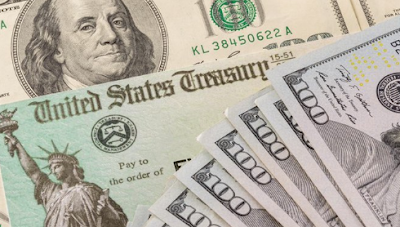 $600 CHECKS START GOING OUT: The $600 payments to most Americans that were approved as part of the coronavirus relief act started going out last night to those who have direct deposit, according to Treasury Secretary Steve Mnuchin. The payments will continue into next week. The payments are based on income reported to the IRS for the 2019 tax year. Every adult who earned less than $75,000 is eligible for the full $600. Couples with incomes up to $150,000 will receive $1,200. Parents of dependent children will get an additional $600 per child. The payments are phased out at higher income levels. There is no payment to individuals who made above $87,000 in 2019.
➤NEW STRAIN OF VIRUS CONFIRMED IN U.S.: The new and more easily transmitted variant of COVID-19 has reached the U.S. Colorado Governor Jared Polis said yesterday that a state laboratory has confirmed that a man in his 20s has contracted the variant, known as B.1.1.7., and is in isolation in Elbert County. The mutant virus was first detected in Great Britain and has since been identified in 18 other nations. The vaccines produced by Pfizer and Moderna are both expected to be effective against the new and old versions of the virus.


➤CALIFORNIA EXTENDS STAY-AT-HOME ORDERS: Strict stay-at-home orders have been extended into the new year in California's southern and central regions, state officials announced. Some hospitals are so overflowing with patients that they are being treated in hallways, gift shops and tents, The New York Times reports. No date has been set for the restrictions to expire, as ICU capacity is being monitored daily.


➤AN INAUGURATION LIKE NO OTHER: Construction of the viewing platform in front of the U.S. Capitol is already underway in advance of the January 20th inauguration, but many of the traditional flourishes will not be seen this time. The Presidential Inaugural Committee, a joint committee of Congress, has announced that President-elect Joe Biden and Vice President-elect Kamala Harris will be sworn in via "a historic ceremony that includes vigorous health and safety protocols." Anyone inclined to show up to watch is urged to stay home and see it on television.

➤CONGRESSMAN-ELECT DIES OF COVID-19: Luke Letlow, a Congressman-elect from Louisiana's 5th Congressional District, died last night of complications from COVID-19. He was 41 and is survived by his wife and two young children. He served as chief of staff for Republican Representative Ralph Abraham, who formerly held the seat Letlow was elected to. 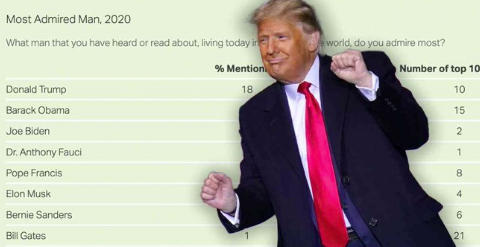 THE MOST ADMIRED LIST: President Trump is the man Americans admire most, according to a new Gallup poll. This is his first outright win in the annual survey, which last year had him tied with former President Barack Obama, who came in second this year. Others in the top 10 include Joe Biden, Dr. Anthony Fauci, Pope Francis, Tesla founder Elon Musk, Senator Bernie Sanders, Microsoft founder Bill Gates, NBA star LeBron James and the Dalai Lama. The list of most admired women is topped by Michelle Obama, followed by Kamala Harris. Also in the top 10 are Melania Trump, Oprah Winfrey, German Chancellor Angela Merkel, former Secretary of State Hillary Clinton, Representative Alexandria Ocasio-Cortez, Queen Elizabeth II, Supreme Court Justice Amy Coney Barrett and environmental activist Greta Thunberg.
➤FLIGHT TO SUBURBIA: Home prices in the U.S. rose in October to a level not seen in six years, and the number of available properties for sale dropped to a record low. That pushed prices up 7.9% in October compared to a year earlier, according to the Case-Shiller home price index released yesterday. The dominant trend, according to the report, is a new flight to the suburbs. Spurred by the coronavirus pandemic, many are leaving apartments in crowded cities for more spacious homes in the suburbs, preferably with home offices.

➤DRONES IN THE AIR: The Federal Aviation Administration has issued new safety rules for commercial use of drones. The new guidelines are expected to lead the way to greater use of drones for delivering packages. Amazon and UPS are among the companies that have been testing use of unmanned drones for years, but regulatory delays stymied any substantial rollout.

.@AmericanAir passengers took off this morning on the first U.S. commercial flight of a Boeing 737 Max since the aircraft was allowed to return to service after a nearly two-year absence. https://t.co/btCcrWujfD pic.twitter.com/TYjUlNx2A3


➤BOEING 737 FLIES AGAIN: American Airlines Flight 718 flew from Miami to New York yesterday, marking the first time a Boeing 737 Max was used on a commercial U.S. flight since March 2019. The jetliner was grounded after two crashes revealed flaws in the flight control system. A Congressional investigation faulted Boeing for manufacturing and management errors and the Federal Aviation Administration for inadequate oversight.
➤SABOTEURS CUT OFF ASPEN'S HEAT:  A coordinated attack shutting off the gas lines to Aspen, Colorado left thousands of people without heat on Saturday night. According to utility officials and ABC reporters, approximately 3,500 customers lost service. The restoration process is grueling, as crews have to go to each individual customer’s natural gas meter, turn it off manually, and then relight the pilot light. As Aspen police distributed approximately 6,000 portable space heaters, utility officials expressed uncertainty about how long remedying the situation will take. Meanwhile, temperatures were expected to fall almost to zero on Tuesday night. The county commissioner used the word terrorism to describe what he fears is an attempt to destroy the mountain community in the midst of the holidays. As the FBI joined the investigation, police announced that three Black Hills Energy gas line sights had been struck, calling it a coordinated attack. While their investigation is still underway, some physical evidence has been uncovered, including footprints and potential indicators that radical environmental advocates could have been behind the attack. “Earth First!” was written on one of the sabotaged pipes. No security cameras were present at the sites. While no injuries have been reported, the impact this will have on the people of Aspen may be severe.
➤HERSHEY UNVEILS HOLIDAY CANDY 2021 LINEUP, INCLUDING CHOCOLATE BUILD-A-BUNNY:

The new year is looking pretty sweet from here. On Monday, Hershey announced its 2021 Valentine’s Day and Easter product lineup, which includes a chocolate Build-A-Bunny. Many fan favorites, like Reese’s eggs, will be returning. But there will also be some exciting new additions, including a Reese’s Peanut Butter Cup topped with marshmallow and a chocolate Build-A-Bunny. Based on similar products that the massive multinational company has released in the past, including "Build-A-Snowman" and "Build-A-Santa,” the Build-A-Bunny is a chocolate bunny with pieces that can be broken off and rearranged in a variety of ways. While the Build-A-Bunny is certainly exciting, Michael Resse, the Hershey senior brand manager for holidays, noted that the Mallow-Top Peanut Butter Cup will be the company’s premiere Easter treat. He claims that they have managed to combine the key Easter flavors, milk chocolate, marshmallow, and Reese’s peanut butter, into the perfect holiday cup—even going as far as calling it a “new seasonal masterpiece.” Additional 2021 releases will include rose-shaped chocolates, chocolate teddy bears, and numerous candy-boxes. These new takes on classic items promise to be perfect for the holidays, regardless of how the coronavirus pandemic impacts them next year.

BREAKING: Alabama's DeVonta Smith is The Associated Press college football player of the year and the first wide receiver to win the award.


🏈DeVONTA SMITH IS PLAYER OF THE YEAR: The Associated Press has named Alabama Crimson Tide's DeVonta Smith as Player of the Year. Smith is the first wide receiver to get the award. Smith and teammate Mac Jones are among the finalists for the Heisman Trophy, which will be awarded next week to either Trevor Lawrence of the Clemson Tigers, Kyle Trask of the Florida Gators, Smith or Jones.

🏀KEVIN LOVE IS OUT FOR A WHILE: Kevin Love of the Cleveland Cavaliers will be out for three to four weeks after aggravating a calf injury during Sunday's game against the Philadelphia 76ers.

🏒BLACKHAWKS CAPTAIN OUT INDEFINITELY: Chicago Blackhawks captain Jonathan Toews is not joining his team at training camp. He reports he has been feeling "drained and lethargic" and is working with doctors to find out what's wrong. The 2021 NHL season begins January 13th.

🏈RUSSELL OKUNG'S GOT THE BITCOIN BUG: Carolina Panthers offensive lineman Russell Okung has been bitten by the bitcoin investing bug. He demanded and got half of his $13 million base salary for the 2020 season in cryptocurrency. If the investment doesn't work out, he'll probably be okay. He has earned $108 million in his NFL career since starting out in 2010, according to Spotrac.

Ice and snow will not be the only threats with a dynamic storm set to unfold during the final days of 2020: https://t.co/rP9U5LvuD6


➤SNOW, FLOODS THREATEN NEW YEAR'S EVE CELEBRATIONS IN US: New Year’s Eve celebrations across the United States will be disrupted by blizzards and thunderstorms—a fitting capstone to a historically disappointing year. In the Midwest, south, and east, a storm system will bring heavy rain, cold temperatures, and potential flooding, according to the National Weather Service. This comes just a week after the east coast was buried under inches of snow and blizzards hit Minnesota, Ohio, Iowa and the Dakotas. 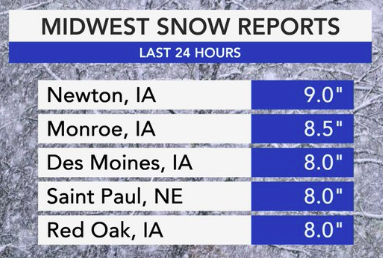 In the Deep South, heavy rainfall is expected on New Year’s Eve, and it is possible that damaging wind and tornadoes will blow through. Florida expects to see more cold weather on New Year’s Eve, with freeze warnings remaining in place since Christmas.
Up in New York City, rainfall and temperatures in the 40s are expected; incidentally, the city’s renowned Times Square celebrations have already been reimagined to be held virtually due to the coronavirus pandemic. On the other side of the country, the Northwest will also see showers and possible snow on both New Year’s Eve and New Year’s Day. While this nationwide inclement weather would be disappointing and disruptive any year, it is an especially painful blow at the height of the coronavirus pandemic, as people will not be able to celebrate more safely outdoors.
Posted 4:28:00 AM