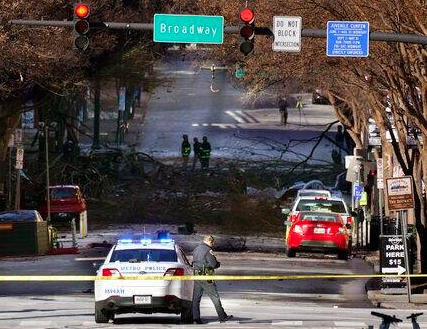 Anthony Q. Warner, 63, has been identified as the "bomber" in the Christmas day explosion in Nashville by U.S. Attorney Don Cochran.   The Tennessean reports Cochran announced the update to the investigation in a Sunday afternoon news conference.
"Anthony Warner is the bomber. He was present when the bomb went off, and he perished in the bombing," Cochran said.

Officials in Nashville say that the individual responsible for the bombing on Christmas Day was an "individual named Anthony Warner" who perished in the explosion pic.twitter.com/1Hn7UhtNA3

DNA found at the scene was matched to samples taken at another location searched by investigators, Tennessee Bureau of Investigation Director David Rausch said Sunday. The TBI was involved in testing the evidence.
Because they had identified a suspect, investigators said they were able to match samples to a potential family member quickly.
At this time, officials said there is no indication that anyone outside of Warner was involved in the explosion. Authorities reviewed hours of surveillance footage and they say they only saw Warner.
A motive in the bombing has not been released and is still under investigation according to FBI Special Agent for Public Affairs Doug Korneski.
The types of explosives used in the bombing were still under investigation, authorities said. The FBI said Warner wasn’t on the radar of authorities before Friday’s explosion and declined to deem the explosion an act of terrorism.
The Wall Street Journal reports intelligence officials have considered whether an AT&T Inc. switching station that the RV was parked outside of was targeted in the bombing, according to a person briefed on the investigation.

Speaking on CBS’s “Face the Nation” Sunday morning, Nashville Mayor John Cooper said, “To all of us locally, it feels like there has to be some connection with the AT&T facility and the site of the bombing.”

The bombing, which came after a sound system in the RV warned listeners that an explosive was inside, injured at least three people and damaged at least 41 buildings, one of which was destroyed, according to authorities.

The bombing caused damage to the AT&T switching center and knocked out phone and internet service in much of Tennessee, Kentucky and Northern Alabama. The telecom company said Sunday afternoon that it had restored 96% of its wireless network, 60% of business service and 86% of consumer broadband and entertainment services.

Switching centers, also known in the industry as “central offices,” represent vulnerable spots in the country’s telecommunications infrastructure because of the important equipment they house and how close they often are to busy downtown business districts. Many are hulking brick-and-concrete structures built several decades ago when the original AT&T monopoly employed thousands of human operators to route customers’ phone calls. 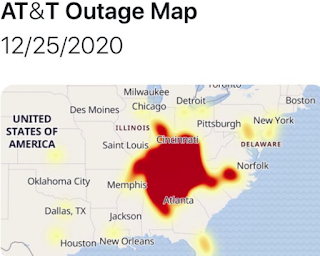 Digital equipment later replaced those operator banks, but the buildings continued to serve as hubs for hard-to-move fiber optic lines that shuttle data. Access to the buildings is strictly guarded, though their owners have less control of the environment outside those centers.

Physical attacks on those network hubs are unusual. However, telephone-pole wires and cellular towers are frequent targets of intentional attacks. Gunshots and vandalism cause several dozen outages in the U.S. each year, according to Federal Communications Commission reports.
News4Nashville reports a source close to the federal investigation said that among several different tips and angles, agents are investigating whether or not Warner had paranoia that 5G technology was being used to spy on Americans.
A spokeswoman for the FBI said they could not comment because of the pending investigation.
Posted 3:20:00 AM